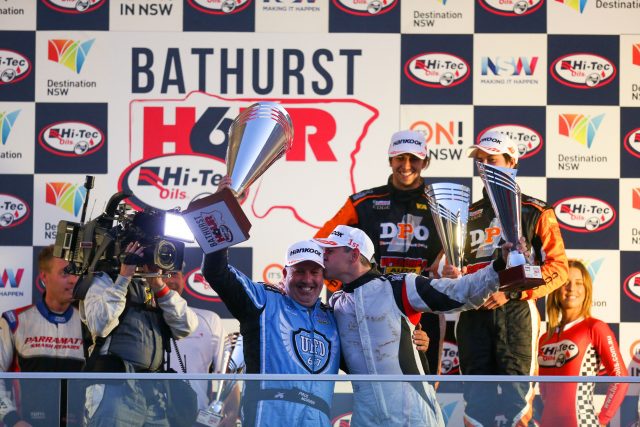 Morris and Searle celebrate on the podium

Paul Morris has become the first man to claim the Mount Panorama triple crown by winning the three major events around the famous circuit after victory at the Bathurst 6 Hour.

Morris and Luke Searle combined to win a nail-biting finale in a race that had shades of Morris’ Bathurst 1000 victory with Chaz Mostert.

The pair raced from last to first with Mostert passing Jamie Whincup on the final lap of the race to claim the victory.

It was a result which race vanquished the demons of 1997 for Morris, who that year crossed the line first in the Super Tourer edition of the 1000, only to be excluded when it was ruled that co-driver Craig Baird had exceeded his maximum driving time.

Today, Searle chased down and passed Mostert in the dying moments of the race, in the process handing Morris the unique Bathurst title.

“It was in the back of my mind for sure,” Morris admitted after the race when asked if he’d considered the prospect of becoming the first man to win the Bathurst 1000, Bathurst 12 Hour and Bathurst 6 Hour triple. “It was pretty cool to be able to do that, and to do it with Luke.

“It feels good to be a part of a bunch of guys that have got day jobs and they come to Bathurst and can win a car race.

“I think that’s what this place is all about, it’s about that passion.” 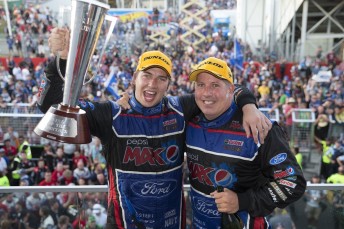 Morris celebrates with Chaz Mostert after the 2014 Bathurst 1000

The victory marks Morris out as the first man to have claimed all three of the Mountain’s major events.

“It’s pretty good to have a matching set, for sure; it puts a bit more icing on the other ones,” Morris said.

“The way we won the 1000 was amazing and that’s definitely the pinnacle of Australian motorsport and to have that I rate that one pretty high.

“Then a couple of 12 Hour wins with some mates as well, but I think the significance of this race is how we did it, and who we did it with.

“It rewards drivers who hang their balls on the dash and have a go, that’s all there is to it really,” Morris explained when asked what the secret was to success around Mount Panorama.

“If you want to man up and dig deep over the top, you just go fast.

“That’s what you saw with Chaz and Luke, the drivers just going at it punch for punch, and setting a lap record with two laps to go.

“It doesn’t matter what sort of car you’re driving, it rewards bravery and that’s what we saw.

“That’s what makes this place special.”