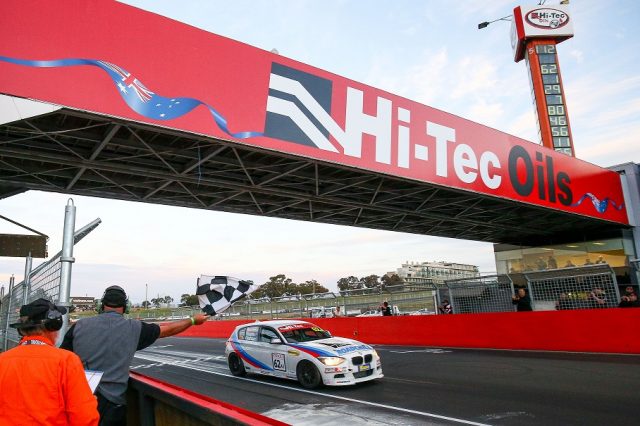 Paul Morris and Luke Searle have sealed an incredible victory at the Hi-Tec Oils Bathurst 6 Hour, with Searle passing Chaz Mostert inside the last five minutes of the race.

Searle and Mostert had been locked in battle for the final stanza of a Safety Car-interrupted race, before problems saw Mostert slow inside the final three laps of the race in the Ford Focus.

The BMW M135i of Morris and Searle had been on contention throughout the day, leading the race on three separate occasions over the course of the six-hour race.

An engine failure late in the race for Craig Baird, who was in fifth at the time in the Mercedes AMG A45, prompted an intense battle for the lead which saw Mostert set a new lap record on the 110th lap.

Gremlins in the leading Focus afforded Searle a run on Mostert down Conrod Straight, the BMW driver pouncing at the Chase.

“I was up the inside of him and I started looking around for yellow flags because it was too easy,” Luke Searle said.

“I was putting it all on the line, so I had to get him.

“We dropped fifth and sixth gear, but that’s not a mechanical, I think that’s a bit more of driver abuse,” admitted the Ford star.

“We were getting pushed pretty hard there for that whole last stint from Luke and I’m going to put my hand up for that one; I think I was a bit harsh on the old production car box!”

Earlier in the day, pole-sitters Grant and Iain Sherrin lost three laps when a hose worked its way lose in the BMW M4.

The duo had been leading at the time before dropping outside of the top 50 in the record 64-strong field.

Over the next four hours they worked their way back onto the lead lap, and looked to have battled their way back into contention for the race win before a puncture ultimately ended their hopes of victory.

It was a tough day at the Mountain for Dylan Thomas and Tim Slade too, the pair forced out of the race with an engine failure while leading the race.

They were soon joined on the sidelines by John Bowe and David Wall when a driveshaft engine saw their Mitsubishi EVO IX grind to a halt on the entry to the Cutting, ironically at the same place as the Thomas car had earlier in the race.

Both incidents drew the Safety Car, which was called into action 11 times throughout the six-hour event, heading the field for almost half of the race’s six-hour duration.

In third place was Ryan Simpson and Jim Pollicina in the Mitsubishi EVO, the pair leading 14 laps during the course of the race.

Struggling with brakes in the closing stages, Simpson attempted a last gasp move at Forrest’s Elbow on Duvashen Padayachee to claim third on the road, though the Mercedes AMG A45 driver hung on to the place.

The Padayachee/Ben Porter/Robert Woods car was found to have completed one of their compulsory stops in 2:29s, one second under the minimum transit time for pit lane.

The penalty demoted the trio to sixth and the last car on the lead lap.

Karl Reindler passed 29 cars on the opening lap alone as he climbed from 59th to second before the CGR Performance driver hand the car to Andrew Richmond.

Jack Perkins and Leigh Burges raced their way to victory in Class B, keeping last year’s race winning BMW 335i inside the top 10 for much of the race to end the day.