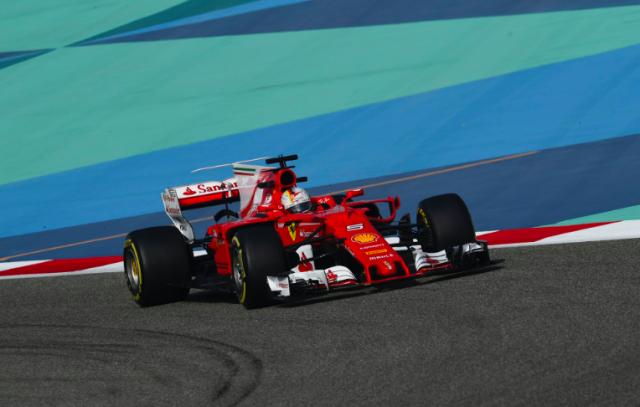 Sebastian Vettel emerged fastest in practice for the Bahrain Grand Prix despite his Ferrari suffering a ‘complete shutdown’ during a race simulation run.

The four-time world champion moved to the top of the times just 30 minutes into Friday’s second practice after topping the times in the afternoon’s first hit out.

Vettel posted a 1:31.310 utilising the super-soft compound tyres to light up the timing screens in the floodlit session. ‘

However, his day was interrupted when his car encountered a glitch that saw him grind to a halt on the entry to the pit lane.

Marshals pushed him back to his garage where his team investigated the problem before sending him back out 15 minutes later.

Vettel’s early effort was enough to keep him at the top of the times with Mercedes’ Valtteri Bottas his nearest rival just 0.041s shy.

It proved to be a hotly contested session with Red Bull’s Daniel Ricciardo third after an encouraging performance in the RB13.

The Australian ended the day just 0.066s adrift of Vettel although the four-time grand prix winner believes the times are not indicative of the ultimate pace to emerge in qualifying.

“It was a good day. I am not reading too much into the low fuel stuff,” said Ricciardo.

“At the moment it looks good but it does not make a whole lot of sense compared to a week ago. So we will be reserved with that.

“But generally a good day, we did everything we had to, a lot of laps, it is nice to drive in the heat. Last week I was cold, so I enjoy this a lot.”

Kimi Raikkonen was fourth for Ferrari after undergoing an engine, MGU-H and turbo change when he stopped on track in opening practice.

He ran wide at Turn 1 on his first effort before being impeded by Renault’s Nico Hulkenberg on the second attempt.

The Brit’s final run saw him 0.2s adrift of Vettel.

After avoiding a penalty for blocking Hamilton, Hulkenberg claimed sixth ahead of Williams’ Felipe Massa.

Red Bull’s Max Verstappen was eighth after losing valuable track time when he damaged the floor of his RB13 after running over a dislodged T-wing from Bottas’ Mercedes.

The top 10 was completed by Haas F1’s Romain Grosjean and Daniil Kvyat for Toro Rosso.

Qualifying is scheduled for 0100 AEST on Sunday morning.