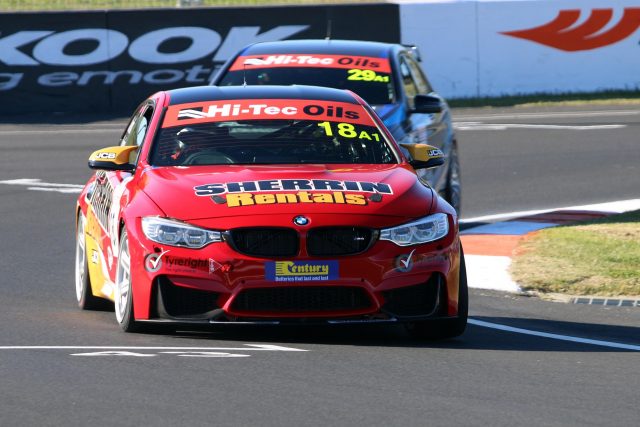 The brothers set out their stall early, Grant Sherrin recording a 2:25.487s on his first flying lap, the time standing for the duration of the 20-minute qualifying session.

“It was a pretty good lap,” Grant Sherrin said after the session.

“We had a little bit of traffic coming through Turns 1 and 2, but I got a bit of clear track coming over the top.

“We think we’ve got most the bugs out that usually stop new cars, so I think we’ll be fine.”

Fastest in the first and third sectors, the Sherrins lost out by more than two seconds to Luke Searle across the top of the Mountain, Searle claiming the second fastest time with a 2:25.487s to start on the front row tomorrow.

Searle will share the BMW M135i with Bathurst 1000 winner Paul Morris and Barry Graham to make an all-BMW front row.

The story of the day however was that of Karl Reindler and Tim Slade, as the two CXC Global Mitsubishi EVO X drivers set the third- and sixth-fastest times respectively.

What made their efforts remarkable was that, having set his time early in the session, Slade donated the driveshaft out of the car he’s sharing with Dylan Thomas to enable Reindler the opportunity to set a qualifying time.

Reindler’s and co-driver Andrew Richmond’s car had broken an axle the day prior and spares were late to arrive before qualifying.

Their efforts were duly rewarded, Reindler setting a 2:26.488s on his first flying lap before improving to a 2:26.161s on his second effort which netted third on the grid.

A difficult session saw Chaz Mostert and Nathan Morcom just 17th in the Ford Focus RS, the squad frustrated ahead of tomorrow’s race.

Such was their plight, Mostert recorded just three timed laps as the duo ended the day three places down on the car in which they won last year’s race, this year driven by Jack Perkins and Leigh Burges.

The Burges/Perkins combination was the fastest B1 Class qualifier in the BMW 335i in 14th overall, while Tony Virag in the Holden Commodore managed 18th to be fastest B2 Class entry.

Another Commodore topped A1 Class, with Trevor Symonds, Paul Lane and Scott Bargwanna in the VY HSV GT3 with the 12th best time overall.

Todd Hazelwood banked a solid lap in the first qualifying session in the BMW 130i he’s sharing with Robert Rubis, his 2:35.240s seeing the Super2 racer claim pole position in Class C ahead of Hadrian Morrall and Colin Osborne in the Renault Megane RS.

The leading Mercedes AMG A45 belonged to Rod Salmon and Nathan Antunes in fourth place, while David Wall and John Bowe were the leading Mitsubishi EVO IX in eighth place.

A total of 61 cars qualified, with that number rising to a potential 64 as a number of competitors who failed to set times are expected apply for dispensation to start tomorrow’s race.

The Hi-Tec Oils Bathurst 6 Hour is scheduled to get underway at 1130 (AEST).