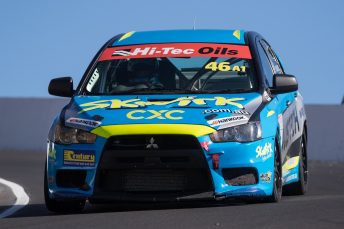 The Reindler/Richmond Lancer which received a borrowed driveshaft

The CXC Global team has managed to qualify both of its Mitsubishi EVOs for the Bathurst 6 Hour despite only having one working driveshaft between the two cars.

Karl Reindler was able to qualify the EVO X which he is sharing with Andrew Richmond thanks to a mid-session driveshaft swap, and both cars will now start inside the top six for tomorrow’s race.

Having suffered a driveshaft failure during second practice on Friday, the duo sat out this morning’s final practice session as they waited on the arrival of a replacement from Sydney.

However, the part did not arrive in time, forcing the team to take the unprecedented decision to remove the driveshaft from the sister car of Tim Slade/Dylan Thomas car mid-session.

“There wasn’t another shaft around, so we had to come up with a plan,” explained Richmond.

“The best plan was to put Tim out at the start, do one flying lap, come into parc ferme, take the shaft out in parc ferme, rush it back up, get it into our car.

“What a fantastic effort from the team and Karl.”

The squad’s plan, which was approved by officials before qualifying, heaped the pressure on Slade, who was afforded just a single flying lap at the beginning of the 30-minute session before pulling into pit lane.

“That was the whole plan,” Slade explained to Speedcafe.com.

“I knew I was only going to get one flying lap and then I had to come into the parc ferme area.

“They pulled the shaft out and put it in Karl’s car. They got it done a hell of a lot quicker than they thought.

Trouble on Friday meant Reindler’s first qualifying lap was only his seventh timed lap of the weekend, setting a 2:26.161s on his second flying lap.

“Firstly, huge props to Sladey and the guys for letting it happen,” Reindler said.

“I don’t think Sladey’s too happy for pipping him – understandably, I wouldn’t be happy if I was him, but a selfless act from those guys to offer the parts as they did.

“I can’t believe we got it done. We actually got it ready with about 15 minutes to go.

“Then I started driving up pit lane and I started hearing another grinding noise similar to what I heard yesterday and thought it was game over.

“It turns out the different set of wheels we’ve got had a different offset or something like that, but they got the job done.”

With the replacement driveshaft set to arrive in Bathurst this evening, both cars are expected to take the start of tomorrow’s race, with Slade and Reindler both forecasting a tough day at the office.

“I still don’t really know what I want from the car, I’m still working out how to drive it,” admitted Reindler.

“I need a bit of self-control and discipline because it’s a production car, not a race car, so you’ve got to nurse these things as opposed to quali lap after quali lap like in other categories I race in.”

“It’s a six-hour race, there’s going to be plenty that goes down during the race,” said the Supercars full-timer.

“There’s lots of cars, and they’re obviously production cars as well so they’re not the strongest things in the world.

“You’ve got to get through the race mechanically sound and be smart, stay out of trouble; there’s going to be a lot of traffic for the whole day.”