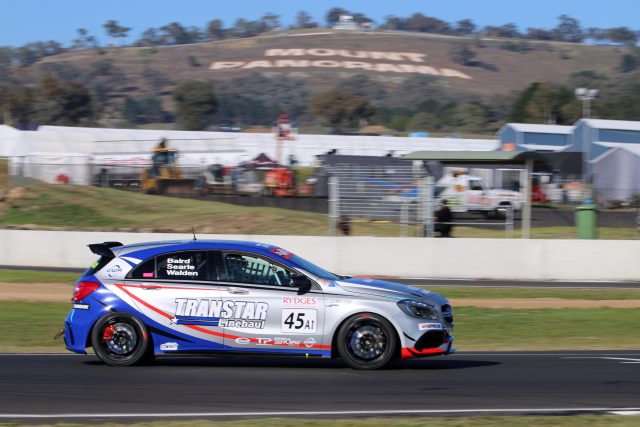 An early turbo failure saw Garth Walden grind to a halt in opening practice ahead of this weekend’s Hi-Tec Oils Bathurst 6 Hour at Mount Panorama.

Walden rolled stopped on track halfway up Mountain Straight just 20-minutes into the opening 60-minute practice session with smoke billowing from the Mercedes AMG A45.

“We just had a turbo failure coming out of turn one going up the hill, the car lost boost and obviously a lot of smoke,” said Walden.

Despite the failure, Walden remains confident the car will be back on track later today, the team is already working to replace the turbo.

“(We’re) putting another new turbo on, and we will be ready for P2. Other than that, the car feels all right, we will just ease it into it.

“We are not too fazed about it, will get it fixed and press on.”

Sharing the driving duties with Walden is Craig Baird, the New Zealander making his debut at the Bathurst 6 Hour, the turbo failure preventing the veteran from getting out on track.

Walden debuted the Mercedes AMG A45 at last year’s Bathurst 6 Hour, though despite strong pace ultimately retired with overheating issues.

The GWR team has stepped up its operations for this year’s event with a second Mercedes-AMG A45 being run for Robert Woods, Duvashen Padayachee, and Ben Porter.

The trio ended opening practice outside of the top 20, while Walden managed the 15th best time before dramas ended his session.

The BMW M4 of Grant and Iain Sherrin topped the opening session with a best time of 2:27.885.

A second 60-minute practice starts at 1335 this afternoon.