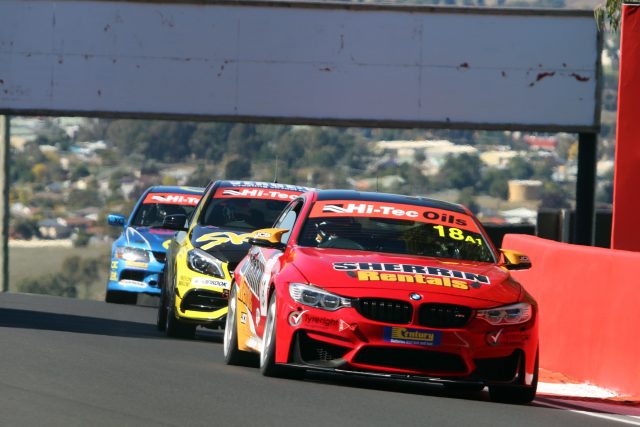 The duo clocked a best lap of 2:27.885 in the opening session of the day in their BMW M4, before recording the third best time in the afternoon’s second practice.

“We are pretty happy straight out of the box,” said Grant Sherrin.

“After the test days where it everything went well we did think it would be quick here, but there are a whole lot of unknowns coming here too

“There are a lot of new cars here, and it is still early days with a lot of people still getting into the groove.

“There are a couple of little things we need to work – we are just having a little bit of a traction issue through some of the corners so we just have to tidy up some of our suspension settings – but other than that it feels awesome.”

Paul Morris, Luke Searle, and Barry Graham ended the day second fastest, almost half a second off the back of the Sherrin’s pace at the head of a tight group that saw four cars split by little more than 0.2s.

The morning’s session proved the fastest of the two, the Morris/Searle/Graham entry one of only a handful to improve their times.

Rod Salmon and Nathan Antunes were third fastest, setting their best time in the opening practice session of the day aboard the 2017-spec Mercedes AMG A45.

Last year’s race winners, Chaz Mostert and Nathan Morcom, enjoyed a largely trouble free day in their brand new Ford Focus RS, sitting comfortably inside the top 10 in both sessions and chalking up the sixth best time of the day in the morning session.

A turbo failure for the Garth Walden and Craig Baird Mercedes AMG 45 triggered the red flag after 20-minutes into the opening 60-minute practice session.

Baird set the 10th fastest time of the day in Practice 2 after the team was able to replace the blown turbocharger, but is set to change the engine as a precaution ahead of Saturday.

There was a smattering of engine problems up and down the lane, with two of the CXC Global team’s four cars suffering dramas.

With more than 60 cars on track, space was at a premium as drivers jostled to find clear track to set a representative lap time, with a number dropping wheels off the circuit as they approached, and stepped over, the limit.

The car sustained damage to the front end when McGill found the wall at the Dipper, triggering a red flag which lasted 20 minutes.

“I got to the dipper and turned left to come out of it and there was a knock and then next thing I know I was just a passenger, straight into the wall and that was it,” McGill said of the incident.

“It has broken a disc and bits of pieces and then there is (the question of) whether the rail is bent and whether we have the spares to fix it.”

The leading A2 Class entry was Trevor Symonds, Paul Lane, and Scott Bargwana in a VY HSV GTS.

In B1, Leigh Burges and Jack Perkins were fastest, finishing 12th overall in a BMW 335i, while class B2 was topped by Joe Krinelos, Tony Virag, and Anthony Loscialpo in a VF Commodore.

Colin Osborne and Hadrian Morrall topped Class C in their Renault Megane RS, and Class D was headed by Jimmy Vernon and Mark Caine in a Toyota 86.

A final practice session remains at 0740 (AEST) tomorrow morning ahead of two qualifying sessions that will see the 66-car field split in half – the bottom 50% qualifying at 1250 ahead of the top 50% taking to the track at 1330 tomorrow.