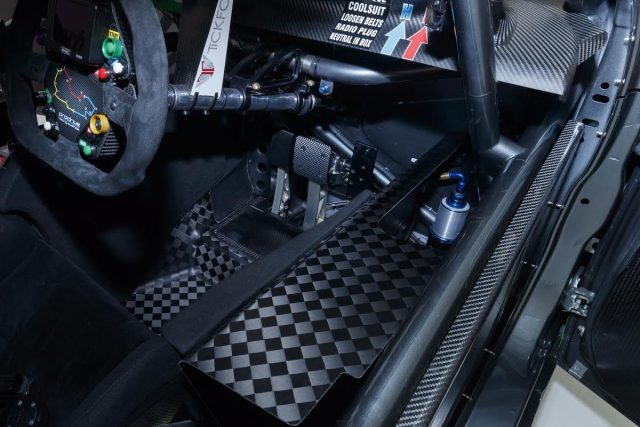 The Supercars Commission has ruled that all cars will adopt extra leg protection for drivers which was confirmed by the official Supercars website.

Cockpit safety has been an area Supercars has looked to improve after Chaz Mostert broke his leg after contact with the gear lever, during a massive crash in qualifying for the 2015 Supercheap Auto Bathurst 1000.

Last Saturday Rick Kelly suffered a muscle tear in his left leg as a result of the 12-car crash at Symmons Plains.

DJR Team Penske has led the way by developing its own system based on leg protection trays used in NASCAR.

The squad begun working on a device since November 2015 with its final iteration installed in both its cars for the start of this season.

Prodrive has since adopted the padded carbon fibre tray designed by DJRTP and produced by LSM Advanced Composites in Toowoomba.

The squad debuted the concept in Mark Winterbottom’s cat at Albert Park ahead of planned roll out for all of its cars.

“The Commission has resolved to mandate that all cars in the Virgin Australia Supercars Championship have a form of lower leg protection from Sandown onwards,” Supercars sporting and technical director David Stuart.

“Any design used will need to be built to a specification provided by Supercars and be submitted and approved for use.

“The requirements will include minimums for weight, foam specification, covering specification and layup that will be distributed to teams in the coming days.

“At present the only one that has been submitted to us and approved is the DJR Team Penske version that they are currently running.

“Teams are free to purchase that if they want, but if they come up with their own design they will need to meet our requirements.”

Mobil 1 HSV Racing’s confirmed to Speedcafe.com that it has already ordered the LSM device for its two cars.

Team boss Adrian Burgess says his team’s chassis have already been modified to adopt the system.

“We wanted it to be made mandatory and I was one of the ones pushing for it at Commision level,” Burgess told Speedcafe.com.

“We have got ours ordered and we modified our chassis to accept it over the summer break.

“We are just waiting for delivery and as soon as we can get it we will bolt it in.”