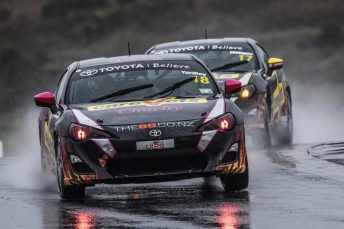 Yardley in the most recent New Zealand Toyota 86 Championship

Reigning New Zealand Toyota 86 champion Ryan Yardley will be part of a 38-strong entry list when the Australian series returns this month at Phillip Island.

Yardley will race with Brian Hilton Motorsport in the car which Drew Ridge campaigned in the inaugural Australian season.

The drive came as part of the prize for taking out the 2016/17 New Zealand Toyota 86 Championship, for which the winner would be offered an international drive.

“We are still finalising support and sponsorship for the whole series, but we’re committed,” said Yardley.

“It’s a very exciting chance to race at some very high profile events.”

Despite the similarities of the two series, the 18-year-old will not be running on an entirely familiar mechanical package.

The Australian series runs all-weather road tyres supplied by Dunlop, in contrast to the Michelin slicks used in New Zealand, while there are also differences in brake and suspension packages.

“I think the adjustment will be fine,” he said.

“I’m looking forward to seeing how the tyres work compared to our slicks and of course will have to work on how the cars behave in the wet because we don’t have a wet tyre option.”

As previously reported, Jason Bargwanna and Warren Luff will be the invited drivers for the opening round.

While Will Brown has graduated to the Dunlop Super2 Series, Cameron Hill, Tim Brook, and Aaron Seton will return after finishing in the top five in 2016.

Liam McAdam and Kim Jane will join the series from Super2 and V8 Utes, respectively.

McAdam contested five of last year’s seven Super2 rounds with Eggleston Motorsport, while Jane will join the category full-time as well as racing in the final two rounds of the V8 Utes.

Carrera Cup Pro-Am race winner Dylan Thomas steps up from a predominantly state-level program in New South Wales, entering cars for himself and Peter McNiven under the CGR Performance banner.

Reid Harker, runner-up to Yardley in the most recent New Zealand series, will also run in the Australian series.