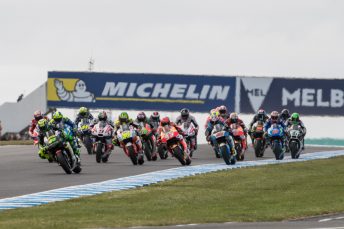 The start of the 2016 Australian MotoGP

Michelin will continue as naming rights sponsor for the Australian Motorcycle Grand Prix in 2017, Dorna Sports has announced.

The French tyre manufacturer took over as naming rights sponsor of the race last year, in its return to the category as the new control tyre supplier.

Cal Crutchlow won the race after Marc Marquez crashed out while leading.

“The opportunity Dorna has given us again this year to associate Michelin with the Australian GP, which is one of the MotoGP rounds that bikers from all over the planet invariably look forward to the most eagerly, is a tremendous lever for us,” said Gary Guthrie, president of Michelin’s two-wheel tyre division.

The Australian Motorcycle Grand Prix had been partnered by four different naming rights sponsors in the five years prior to Michelin’s signing.

The 2017 world championship continues with the Grand Prix of the Americas from April 21-23, while the Australian Grand Prix will take place over the weekend of October 20-22.