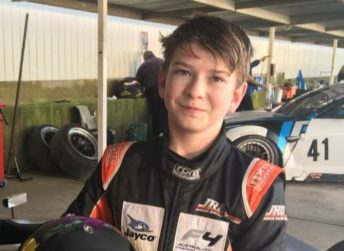 Tyler Everingham will add Australian Production cars to his Formula 4 racing commitments in 2017, starting with this weekend’s Bathurst 6 Hour.

The 16-year-old will drive for Osborne Motorsport in a Renault Megane (Class C), and will be joined for the Easter production car enduro by 66-year-old Bob Hughes.

While Everingham is set to race the full six-round season with the team, his co-driver for the rest of the year has not been determined.

The drive comes in addition to the Dubbo boy’s second CAMS Jayco Australian Formula 4 campaign, in which he currently sits sixth in the points after the opening double-header round at Sandown.

“I am definitely fairly nervous, but this is a dream come true,” said Everingham.

“I am (also) really looking forward to gaining a lot more seat time,” he added ahead of his debut season in production car racing.

“At the moment I am limited in that regard as to the amount of time I can spend in the F4 and other cars, so that is going to be very important for my development.”

The Hi-Tec Oils Bathurst 6 Hour, which doubles as the opening round of the Australian Production Car Cup, will be held this weekend from April 14-16.