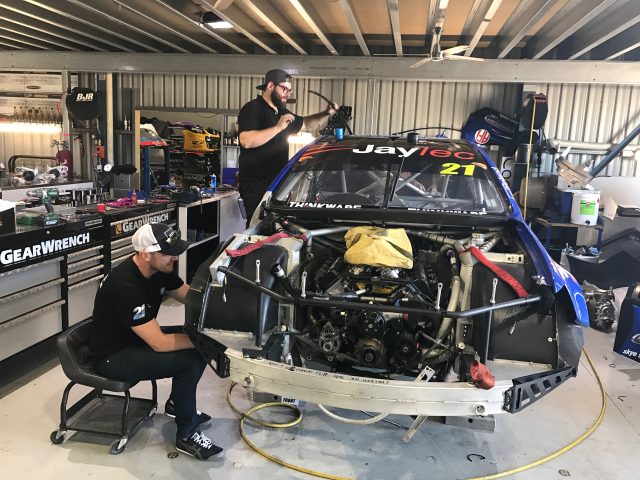 Tim Blanchard helping on the rebuild of his Cooldrive entry

Brad Jones Racing drivers have been on hand to assist the squad as it undertakes rebuilds of three cars following carnage at the Tyrepower Tasmania Super Sprint.

BJR’s Supercars pilots Tim Slade, Nick Percat and Tim Blanchard have spent time chipping in with the repairs, while providing the crew with snacks and drinks to show their appreciation of the work being carried out.

The Albury team has enlisted all of its team to help with the repairs with Supercars and the Dunlop Super2 Series back in action at the WD-40 Phillip Island 500 next weekend.

Two of the operation’s Dunlop Super2 cars suffered extensive damage in Race 2 at Symmons Plains, which has seen the squad forced to build up two spare chassis for Macauley Jones and Jack Smith.

Repairs have also been carried out on Blanchard’s #21 Supercars entry after it sustained a heavy crash in last Sunday’s race.

The damage to the chassis rails on Blanchard’s car has since been fixed with the car edging closer to completion.

The latest rebuild project arrives after staff worked through the night last Saturday to repair its three Supercars entries, which were involved in a 12-car pile up in Race 3.

“I think everyone has been chipping in,” Blanchard told Speedcafe.com.

“We have just been floating around and seeing how the boys are going.

“It is all going pretty well. There is a fairly big amount of work to do before Phillip Island.

“My car has had chassis repairs done and has been in the paint shop and now it is just a case of putting it all back together.

“The two DVS cars are coming along pretty well but the team has been getting it done.”

The squad is set for a busy Easter period as it continues to ready its fleet for Phillip Island.