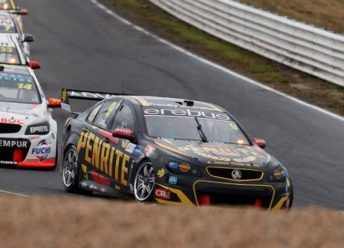 David Reynolds was left encouraged after emerging best of the rest behind DJR Team Penske and Triple Eight in Race 4 of the Virgin Australia Supercars Championship at Symmons Plains.

The Erebus Motorsport driver finished fifth in Sunday’s 200km affair at the Tyrepower Tasmania Super Sprint despite an over-fill in the pits, which cost the Penrite Commodore time.

Notably, car #9 was the first car home from outside of the DJR Team Penske and Triple Eight Race Engineering stables.

Reynolds mused the statistic given the upturn in DJRTP’s prospects since the arrival of ex-Triple Eight technical director Ludo Lacroix, while also stressing the increased difficulty for teams to break into the top-five.

“Out of the Ludo cars, I’m the next one,” Reynolds told Speedcafe.com.

“It’s different because now the DJR cars have got the same ideas as the Triple Eight cars.

“Instead of being three or four Triple Eight cars, there are (effectively) six of them now, and it’s really, really hard now.”

Pleased by a strong run in Tasmania, Reynolds believes Erebus still has to work on its overall package in order to be a consistent presence at the front of the field.

The 31-year-old produced strong pace throughout the weekend after qualifying fourth for Saturday’s Race 3, while team-mate Dale Wood was seventh in the session.

“We’re going good. We’ve still got a lot to go, I think, to compete with the front guys,” he added.

“(We need) speed in every area. You’ve got to look at your car as a whole.

“It’s (got to be) fast down the straight, good on the brakes, good turn, good drive, good balance.

“It was good balance in the race and that was what gave me a good position, (but) it just wasn’t as quick as (Craig) Lowndes.

“We’ve had a few good rounds but I want it to be great.”

The Supercars season continues with the WD-40 Phillip Island 500 from April 21-23.