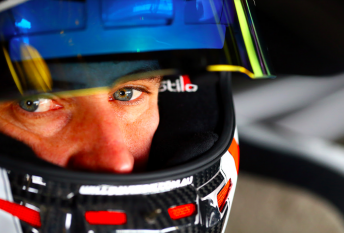 Will Davison is hoping to make a Supercars return at the WD-40 Phillip Island 500 but expects a decision regarding his fitness to be made early next week.

The Tekno Autosports driver suffered a back injury as a result of a frightening 42G impact during a horrific 12-car pile up, which halted Race 3 of the Virgin Australia Supercars Championship at Symmons Plains.

Davison spent Saturday night in Launceston General Hospital before doctors released the Gold Coast based driver on Sunday evening. He returned to his Queensland home on Monday.

In his column published on foxsports.com.au, the 34-year-old has confirmed he suffered a small fracture to a right sided transverse process, which is a small bony projection attached to a vertebrae.

Davison, who lost his rear brakes in the crash, admits the shunt was the biggest of his career which also resulted in a concussion.

His comeback also hangs on whether Tekno Autosports can repair or source a new car for Phillip Island after the #19 suffered heavy damage in the incident.

“To answer upfront the question everyone is asking and wondering about, I plan to be on the grid at Phillip Island in about 10 days’ time,” wrote Davison in his Fox Sports Column.

“Right now, we are awaiting the verdict on how repairable my Tekno Commodore is after the multi-car shunt in Saturday’s opening Supercars race at Symmons Plains.

“Hopefully it’s fixable and we don’t need to search out a replacement car … either way, sadly, the boys are not going to have much of an Easter.

“It’s going to be a scramble to get on the grid at Phillip Island.

“Unfortunately, the impact I suffered in the crash was the biggest of my career. It was measured on the telemetry at 42G.

“I’m still very sore, trying all I can do hopefully to be ready for next week. I won’t realistically know until early next week whether I’m fit enough to drive.

“Basically I have to rest for a few days, then move into a regimen of light training, nothing too strenuous.

“There’s also a concussion and general bruising everywhere … my body took a big hit and everything feels tender but again, this will subside over the next few days.”