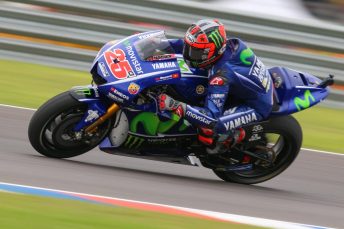 Maverick Viñales has taken his second win in as many starts for Yamaha after Marc Marquez threw away an early lead in the Argentina Grand Prix.

Viñales pulled away at the front while Valentino Rossi gave Movistar Yamaha a one-two and Cal Crutchlow made the podium in his first finish of the year.

Marquez jumped best from the front row and the pole-sitter was over 1.3s clear after the opening lap.

Back in the pack, Jorge Lorenzo’s race ended at the first corner when he crashed his factory Ducati after touching the rear of Andrea Iannone’s factory Suzuki.

Marquez led by 2.2s but handed the lead to Viñales, who had started sixth, when he dropped his Repsol Honda at Turn 2 on Lap 4.

Crutchlow and Rossi ran second and third as a result, but the Italian did not seriously threaten the Brit until he eased passed the LCR Honda on Lap 19.

Viñales held a 2.6s advantage by that time, and added a few tenths more as he backed up his Qatar win with another in Argentina.

“It was a difficult race because I started quite good but already Marc was pushing so hard so I was trying from the first lap to make my own pace,” said the Spaniard.

“Then I saw that he crashed, and I was just thinking to bring all the points I can at home because it was very important to achieve the maximum points today.”

“It was a great battle with Cal at great pace but I had a little bit more (pace) so when I try, I go, and the last lap was very fun because I had a good pace.”

Crutchlow meanwhile said that he had to persist with a warning light on bike #35, but still bagged his first podium since victory in Australia last year, after crashing out of three consecutive races.

Fourth for Alvaro Bautista on an Aspar Ducati was his best result since a podium in France in 2014, while Johann Zarco got his first premier class points in fifth.

His Tech 3 Yamaha team-mate Jonas Folger finished sixth, ahead of Danilo Petrucci, who ran inside the top five for the first 11 laps on his Pramac Ducati, and fellow Pramac rider Scott Redding.

Jack Miller experienced a similar race to that of Qatar, gradually rising to ninth by staying on his Marc VDS Honda while those in front went down.

Shock front row starter Karel Abraham quickly tumbled down the order to 14th by the end of Lap 2 but took his Aspar Ducati to 10th in the end.

Both KTMs finished in the top 15, giving the Austrian marque its first MotoGP points.

Dani Pedrosa crashed out in the same place as team-mate Marquez while running fourth on Lap 14, and nor did the factory Suzukis score any points as Iannone took a ride-through for a jump-start and Alex Rins crashed on Lap 7.

The factory Ducati team left with a pair of DNFs after Andrea Dovizioso was taken out by Aleix Espargaro’s Gresini Aprilia on Lap 15.

The race was run in dry conditions after Saturday rain.

In Moto2, Remy Gardner suffered a broken ankle as he was taken out by Japanese rider Takaaki Nakagami at the first corner.

The Yamahas already hold a sizeable advantage in the world championship ahead of Round 3 in the USA from April 21-23.

Championship points: After Round 2