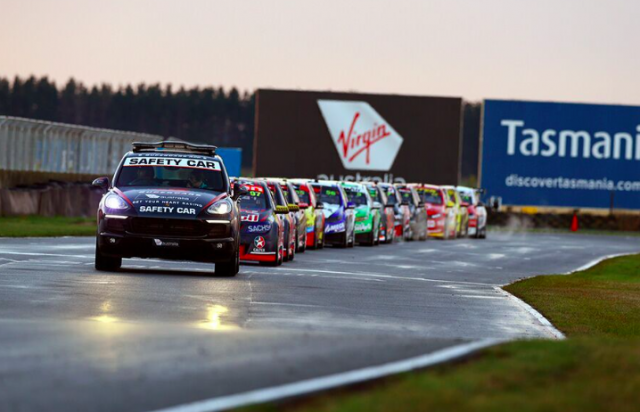 The decision to restart and declare a result for Race 3 at the Tyrepower Tasmania Super Sprint proved a divisive issue among Supercars teams and fans.

Officials were forced to red flag and suspend the action at Symmons Plains following a horrific 12-car pile up on lap 2 of the scheduled 50 on Saturday.

The race was suspended for 50 minutes while medical crews attended to drivers and recovery vehicles cleared the wreckage from the track.

Given the freak nature and severity of the incident, a comprehensive amount of time was required to deem the track clear and safe for action to resume.

A call was made to restart the race and by doing so it fell under the regulations of a time certain finish, meaning a final lap was completed under the Safety Car to produce a result.

Full points were initially awarded before a review by Supercars and CAMS determined that it was not appropriate for points to be awarded given only four laps had been completed.

Under the current sporting regulations (D15.4.5), “If a race is stopped before 50 percent of the scheduled race distance/duration has been completed by the leading Car and cannot be restarted, no points will be awarded.”

Although this rule was superseded after the decision was made to restart the encounter.

The move sparked widespread criticism from both fans and team owners.

Supercars found itself with the dilemma of ensuring there was a show and a result for fans, who turned up at the circuit or were watching the television broadcast.

It also faced the issue of challenging weather conditions, poor visibility and the fading light with the race scheduled as the last event on the bill for the day.

However, there were calls made for the race to be abandoned altogether and run on Sunday to provide fans a proper contest and teams the opportunity to compete for full points.

Triple Eight boss Roland Dane suggested a rerun of the race would have been more appropriate, while leading a call for flexibility on the application of the rulebook when freak incidents occur in the future.

This week’s Pirtek Poll asks, what should Supercars do in the event of a lengthy race suspension in the future?