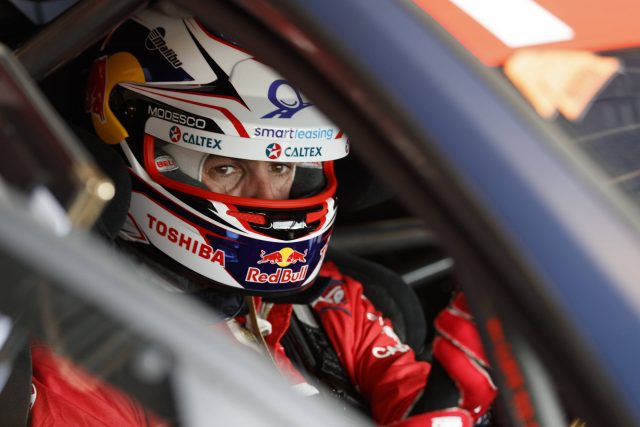 Jamie Whincup felt he had all the ingredients to chalk up his first win of the season in Tasmania but was hampered by a misjudgement in strategy.

The Red Bull HRT driver led the early stages of Race 4 from pole position before falling to third at the chequered flag, behind the DJR Team Penske duo of Fabian Coulthard and Scott McLaughlin.

Whincup produced a strong drive throughout the race held in challenging damp conditions at Symmons Plains.

However, a decision to run a full wet set-up on a damp but drying track, coupled with a slightly mistimed pit strategy, denied him an opportunity to open his account for the season.

The six-time champion was also outmuscled by Prodrive’s Cameron Waters for position early in the race which led to him losing a spot to McLaughlin.

“We had all the ingredients, there were just a couple of factors that came into play,” said Whincup.

“I went down the outside of Cam Waters and he had me off at the hairpin. If that wasn’t the case it would have been a different story.

“We probably should have stayed out a lap, if not two, and waited for that Safety Car rather than pitting straight up.

“We had good pace, we’ve just got to work better as a team and make sure we’re getting those strategies right.

“We had a full wet set-up on the car and most of the race was dry.

“There are just little areas here, there and everywhere that snowball into why we’re not on the top step of the podium.

“We’ll do a better job next time.”

Triple Eight team manager Mark Dutton agreed a sharper strategy could have been deployed to lift Whincup into the fight for the race lead.

“I think we would have liked to have had a bit more pace but nobody was driving away from us,” Dutton told Speedcafe.com.

“We probably could have made slightly better strategy calls with the pit stops and I put my hand up on that one.”

“It’s a good thing (the battle with DJRTP) but at the same time PRA are right there and it’s a very long year,” he added.

“It’s not going to be a two-horse race, but I hope everyone is enjoying the battle.”