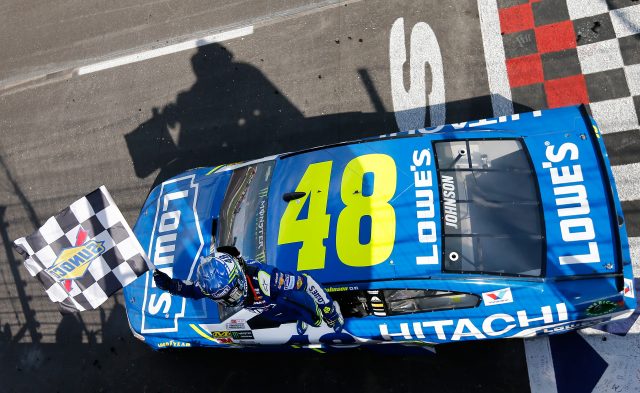 Johnson celebrates for the seventh time in Texas

Jimmie Johnson was fastest when it mattered to score his seventh win at Texas Motor Speedway and 81st of his career as he got Hendrick Motorsports first victory of the year.

Johnson started off the rear of the field after a tyre change after qualifying and made his way through the pack to put himself in the best possible position after the final round of yellow flag pit stops.

Joey Logano got the jump off the re-start, but with less than 20 laps to run Johnson pulled alongside and took the lead which he held through to the finish. He led just 18 of the 334 laps contested.

Kyle Larson also rounded-up Logano and was fast approaching Johnson through to the finish. Kevin Harvick and Dale Earnhardt Jr., rounded out the top-five.

In terms of stage win, Ryan Blaney scooped both bonus stages, but he would go onto finish 12th in the races final results.

The eighth caution was called for debris on Lap 299. Logano stayed on the track. Harvick led the cars down pit road on Lap 301 followed by Johnson, Truex, Earnhardt and Larson.

Larson now leads the championship standings by 17 points over Elliott.

Next Story Drivers come to blows during NASCAR Xfinity race