Coulthard: McLaughlin has raised my game

Coulthard: McLaughlin has raised my game 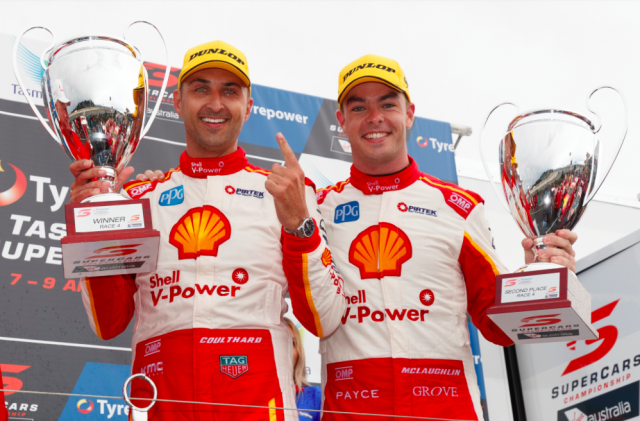 Fabian Coulthard and Scott McLaughlin celebrate on the podium

Fabian Coulthard says the arrival of Scott McLaughlin at DJR Team Penske is pushing him to new heights after scoring an impressive victory at Symmons Plains.

The Kiwi headed a DJRTP one-two finish in Race 4 to record the first championship race win for the squad since Penske’s involvement in the organisation.

Coulthard’s triumph follows a strong start to the season which has seen him score a second and fifth at the Clipsal 500, followed by two wins at the non-championship Australian Grand Prix meeting.

The victory was the 34-year-old’s first in the championship since Clipsal 2015, arriving just hours after being docked 35 championship points, having been deemed at fault for triggering the 12-car pile up in Race 3.

The arrival of Scott McLaughlin at DJRTP had grabbed all the headlines heading into the year promising a fascinating battle between the team-mates.

However, the pair have gelled quickly with the duo lifting each other and the team to a new level, which Coulthard hopes will continue as the season progresses.

“Scotty is definitely pushing me and it has definitely made me raise the bar for my own personal achievements, but we have worked together really well as a team,” said Coulthard, who is 20 points behind Shane van Gisbergen in the championship standings.

“Scott has been at the workshop a lot, we have a really good team environment, we are all working together.

“There is hype about Scott but it is no different to the hype about the team this time last year.

“It has been good for the team and I am really happy with how its going.

“We will just keep improving our car week in and week out, we just focus on what we are doing and hopefully the results will speak for themselves.”

Coulthard’s team-mate McLaughlin is thoroughly enjoying the way the team is working together following a restructure over the off-season.

While the Kiwi was happy to score a second place finish, he expects rivals Triple Eight and Prodrive to come back stronger when the championship heads to the WD-40 Phillip Island 500 from April 21-23.

“I am stoked, it is not just for me as Fabian said, it is fantastic for everyone at home, and here with the team at Shell V-Power Racing.

“They have worked really hard, there is a lot of changes that have been going on not only on the cars but off the cars as well.

“Absolutely (I am confident) heading to PI, I love Phillip Island.

“I am excited, we had some success last year and it is a favourite track of mine so we will see how we go.”