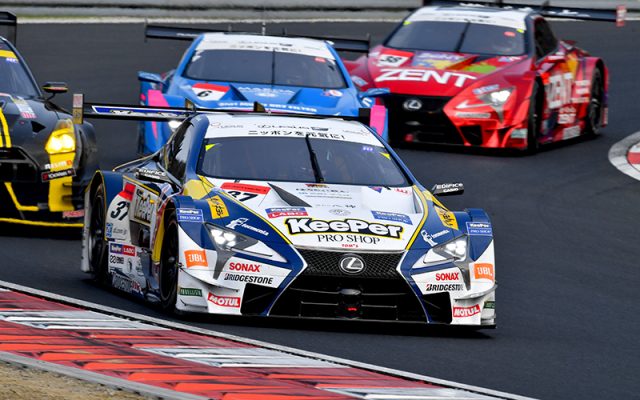 New Zealander Nick Cassidy has taken his first Super GT win as he and Japanese driver Ryo Hirakawa combined to win Race 1 of the championship in Okayama.

The 300km race started under Safety Car as three Honda NSXs failed before the start, including the pole-sitting #8 ARTA entry, before Cassidy quickly moved pass Kazuya Oshima in the #6 Le Mans Lexus to take the lead.

Car #37 would temporarily lose the lead to car #6 during the pit cycle, but Hirakawa re-passed the Lexus which Oshima had by now handed over to Andrea Caldarelli.

Another Safety Car in the second half of the race kept the field tight, but Hirakawa fended off Caldarelli in an enthralling battle for the lead.

Cassidy/Hirakawa won the race by 1.5s, from Oshima/Caldarelli, and Heikki Kovalainen/Kohei Hirate, as the new LC500 locked out the top six.

“I still can’t believe that we won” said Cassidy.

“In my stint, I got a perfect start, so I was able to run with confidence.

“Our driver in the second half, Hirakawa, is very fast, and I knew that this is also a good circuit for him but I still can’t believe how this race went just as I thought it would.”

The championship continues with the Fuji 500km race on May 3-4.

A Kiwi also enjoyed success in Carrera Cup Asia, with debutant Will Bamber winning Round 2 as the Porsche series supported the Formula 1 Chinese Grand Prix.

Martin Ragginger won the opening race of the season in Shanghai, after taking advantage of a first-corner coming-together between Philip Hamprecht and Zhang Dasheng to quickly move from fourth on the grid to second.

Ragginger took over the lead from pole-sitter Andrew Tang on Lap 2 and looked set for victory before a Safety Car caused by a tyre failure for Francis Tjia.

The Austrian held out Tang and Bamber, who avoided being caught up in the Turn 1 incident, in a tight finish, winning by less than 0.3s.

In Round 2, Bamber sat third after an early Safety Car, before working over Ragginger and making the pass on Lap 5.

He then impressively overtook Tang on the outside a lap later, through the Turn 1/2/3 complex, before running away to a comprehensive victory of just under 10 seconds.

“A dream to hear the NZ national anthem on the top step. Amazing first weekend and thank you to everyone who got me here.”

Bamber trails leader Ragginger in the points standings ahead of Rounds 3 and 4 at Fuji from June 2-4. Gilbert started on pole and led away as Richard Wee and Jun San Chen came together and then hit the wall.

Raffaele Marciello would significantly close the gap to Patel in the latter half of the race but ran out of laps to overhaul Indian.

Gilbert was impressive again in Race 2, this time finishing the race as he dragged car #86 from just outside the top 10 to a second-placed finish.

The Davide Rizzo/Anthony Liu Ferrari 488 won the race by over 26 seconds.

Gilbert and Patel thus share the championship lead in the series’ inaugural season.

Races 3 and 4 will take place at the Buriram United International Circuit from May 20-21.