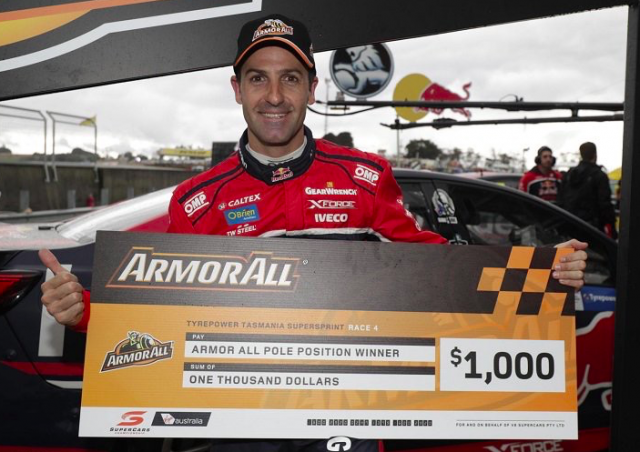 Prolonged heavy rain at the 2.4km circuit delayed qualifying by 20 minutes as officials assessed the condition of the track.

It proved to be another incident-filled session once action got underway with Triple Eight and DJR Team Penske going head-to-head in the closing stages.

Whincup saved his best until the final moments as he secured his 74th career pole from the Shell Ford of Scott McLaughlin with a 58.39s effort.

McLaughlin, who ran off the road at Turn 6 earlier in the session, had held provisional pole as the chequered flag flew, but had to settle for second.

“It’s critical to be up the front, obviously pole’s fantastic but to be in the top five is critical.”

Mark Winterbottom could only manage 12th position in his #5 Prodrive Falcon.

Several cars ran off the road during the session including Lowndes and Dale Wood. The pair both enjoyed spells at the top of the timesheets.

The session was red flagged after five minutes when Alex Rullo found himself beached in the Turn 6 gravel trap in his rebuilt Lucas Dumbrell Motorsport Commodore.