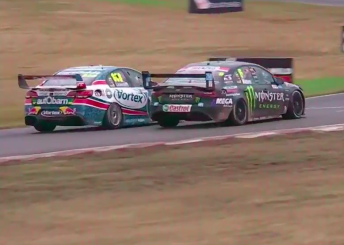 Stewards will resolve a post-race investigation involving Craig Lowndes and Cameron Waters from Race 4 of the Tyrepower Tasmania Super Sprint at the next event at Phillip Island.

The two drivers were involved in a heated battle for position inside the top 10 which resulted in contact.

Television footage appeared to show Waters edge Lowndes wide at Turn 5 which sparked a reaction from the Triple Eight driver.

Lowndes tapped the rear of Waters’ Monster Energy Falcon at Turn 7 which forced him wide and allowed the Triple Eight driver through.

Stewards have confirmed any breach of rules will now be decided at the WD-40 Phillip Island 500.

Meanwhile, the deputy race director conducted post-race investigations into three other incidents and determined that they did not warrant referral to the Stewards because no driver was wholly or predominantly at fault.

The incidents included contact between Alex Rullo and Jason Bright at Turn 2, Shane van Gisbergen and Mark Winterbottom at Turn 4 and a clash between Scott Pye and Winterbottom at the same corner.