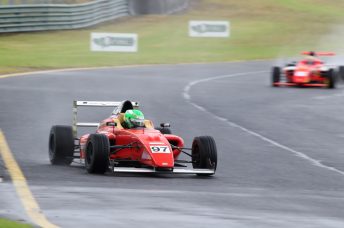 Race one saw Lawson carry his round winning form of Saturday through to another race win, in the race which started in damp conditions with the field undertaking two exploratory laps to get a feel for the conditions.

AGI Sport’s Harley Haber had the best start of the field, climbing from tenth to third in the opening lap, before the safety car was called to retrieve the stricken cars of Simon Fallon (#27 BRM/CoolDrive/Fallon Development Mygale) and Tyler Everingham (#7 Zagame Mygale), after Josh Denton (#91 Team BRM Mygale) and Fallon had a synchronised spin into turn one and Everingham collided with Fallon’s Team BRM machine. Racing resumed uninterrupted on Lap Five, with the field largely settled until Shields passed Haber for third place on Lap Eight. Shields set the fastest lap for much of the race and eventually overtook Rowe for second place.

Race two saw Rowe take his first of two victories for the day, with the wet conditions continuing to see the race start under safety car conditions which were then extended when the rear suspension of Team BRM’s Simon Fallon collapsed. Racing resumed on Lap Five, with AGI Sport’s Zak Best romping away from the field with a brilliant getaway. Teammate Rowe then grabbed the lead on Lap Six, and remained in the lead despite a further Safety Car period.

Cameron Shields climbed up the field to pass AGI Sport duo Best and Harley Haber. The CAMS Foundation Rising Star was engaged in a thrilling battle with teammate and Round One winner Liam Lawson. Lawson eventually nabbed second place off Shields in the final stages of the race. Even with a safety car interruption, Rowe dominated to finished 5.4 seconds ahead of Lawson and setting the fastest lap of the race in the process (1:24.0227).

The third and final race of the day for the category again saw Rowe take win, this time crossing the line ahead of Lawson and debutant Aaron Love. The race was started in normal conditions, with Suhle and Lawson on the front row. Everingham made moves early to be P2 by the end of the first lap before running wide at turn one and dropping to fifth. Nick Rowe meanwhile was setting to work chasing after leader Lawson, setting the fastest times of the race from second position.

The safety car was soon called for Best, who lost the car at the top of Dandenong Road to go sideways into the wall. As Lawson lead the field under the yellow conditions ahead of Rowe and Suhle, the skies again opened up with the rain coming down heavy on the competitors. Three laps later, the field was given the green light to resume for a clean restart.

On lap 10, Rowe would close the gap to just 0.3 of a second from Lawson while continuing to be the fastest racer on the track. With a bold move at the top of Dandenong Road in the wet, Rowe got it done to take over the race lead on lap 12. The race was called at 18 laps in the continuing wet conditions, with rookie Aaron Love claiming third in the race in what is his debut.

The CAMS Jayco Australian Formula 4 Championship will next be on-track at Barbagallo Raceway across 5-7 May. 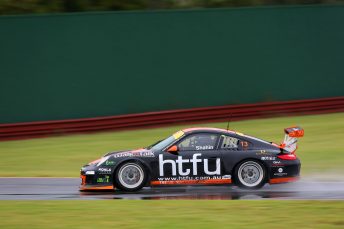 Sam Shahin has closed out the round one win for the Porsche GT3 Cup Challenge presented by Pirelli, clinching the win in the #13 HTFU Porsche courtesy of second and fifth place results in today’s two races.

Both of today’s race wins went to Love, with the results coming after he was forced out of yesterday’s proceedings after being caught up in the chaotic race one start incident which saw John Karaytinos (#16 Richmonds Automotive Porsche), Anthony Gilbertson (#19 Hallmark Homes Porsche), Rob Woods and Ben Stack join Love in being put out of the race.

Love crossed the line ahead of Gilbertson and Grove in race two, before leading Shahin and John Karaytinos (#16 Richmonds Automotive Porsche) to the line in race three.

The Porsche GT3 Cup Challenge presented by Pirelli will next be on-track at Phillip Island across May 26-28. 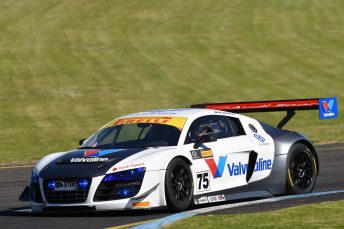 In this afternoon’s race, Salmon took the win in his Skwirk-branded Audi ahead of Smith and Scott Hookey (#33 Fiorano Motorsport Ferrari 458 Challenge). Wayne Mack (#147 Mack Bros Roofing Products Ferrari 458 GT3 2011) and Jindasa rounded out the top five while the race one pole sitter – the #88 Audi Sport Customer Racing Audi R8 LMS Ultra of Rio Nugara and Jake Fouracre – failed to finish. They were joined on the DNF list by Mezzasalma, Gary Higgon (#23 Kentucky Fried Chicken Audi R8 LMS) and the MARC Cars Australia pairing of Melinda Price and Luke McLellan- who failed to finish after pulling into the pits before crossing the finish line on the final lap.

On the way to taking the race two win, Salmon was part of an intense three-way battle for the top spot with McLaughlan and race-leader Smith. A late spin from McLaughlan took him out of contention, dropping him down the order while Salmon undertook an opportunistic move taking advantage of lapped traffic to pass Smith at Dandenong Road in the closing minutes for victory.

The CAMS Australian GT Trophy Series, presented by Pirelli will next be on-track at Winton Motor Raceway across June 9-11. 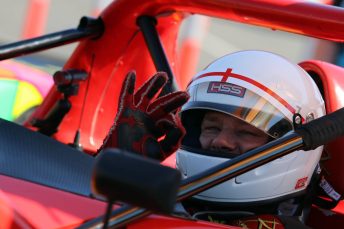 Radical racer Phil Hughes claimed the round victory courtesy of two race wins today in his #42 Hughes Supercar Services Radical SR3. Making Hughes’ race and round wins even more impressive is the fact that he has achieved them while completely lacking second gear all weekend.

While his race three victory was convincing with a 49 second gap over David Crampton (#3 Vantage Freight Services/Prolap Radical SR3 RSX) – who finished second for the round – his race two victory this morning was made possible only on the second last corner after a race-long battle with Peter Paddon (#1 First Focus Radical SR3). Kim Burke (#68 Radical SR3 RSX) rounded out the race two podium, while Sutton claimed third this afternoon. Mark Laucke (#55 Laucke Flour Mills West WX10) was third outright for the round, coming home ninth and fifth in today’s two stanzas.

After a tough race in the wet this morning, Laucke was part of a trio which had the fans enthralled in race three as a three-way battle for fourth position was mounted. When it concluded, it was Jason Makris (#77 Mirage Racing – Marina Mirage West WX10) who claimed fourth ahead of Laucke and Mark Short (#16 MSR Motorsport Fabrication Prince LSR) in what was his first race finish of the weekend after a blown engine yesterday and a mechanical black flag in race two for his replacement chariot in race two.

First in class for the round for the Kumho Cup was John-Paul Drake (#66 Synep Racing West WX10) despite continuing issues in his colourful ‘liquorice all-sort’ West. Terry Peovitis took out the F1000 class honours.

The Australian Prototype Series will next be on-track at Winton Motor Raceway across 9-11 June.

The second race of the Radical Australia Cup’s race weekend was held in overcast yet drying conditions to start, before the heavens opened mid-way through the race to bucket down on the competitors in an echo of yesterday’s race one.

Courtesy of the combined results of yesterday’s race one and today’s race two, Paddon took the round victory ahead of Crampton and Oliver Smith.

The Radical Australia Cup will next be on track at Phillip Island, across May 26-28.