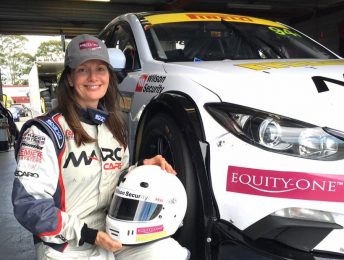 Melinda Price will become the first woman to race in Australian GT competition when she takes the wheel of a MARC Mazda 3 in this weekend’s round of the Australian GT Trophy Series at Sandown.

Today’s pair of 50-minute races represent her first starts in a V8 race car for over 15 years, having stepped back from the sport in the early 2000s before battling breast cancer while pregnant in 2011.

After taking part in historic motor racing in more recent times, Price’s comeback continues when she partners Formula Ford driver Liam McLellan in GT Trophy, which she hopes will be the start of a full campaign in the six-round MARC Cars Championship.

“It’s a fantastic opportunity I’ve been given by Ryan McLeod and the MARC Car team and my personal supporters, I’m excited to be back behind the wheel of a fast race car in a great national series.” Price said.

“Although It’s my first major race meeting in a while, I have done quite a bit of racing at historic events over the past couple of years, and after some success I decided it’s time to make a comeback in a more serious category.”

“I’ve completely fallen in love with motorsport all over again, and am incredibly appreciative of the people in the background who have had the belief in me to encourage and assist me to get to the track this weekend – namely John Bowe and Bruce Williams.”

Price had originally been set to join Bowe in a Heretic Motorsport Bentley Continental in the Australian GT Championship, though that drive is yet to materialise.

McLellan secured pole in class for the pair in car #94 ahead of this afternoon’s season opening races.

The 2017 MARC Championship will run two rounds with each of the Australian GT Trophy Series, NSW Production Sports, and the Australian Sports Sedan Series.