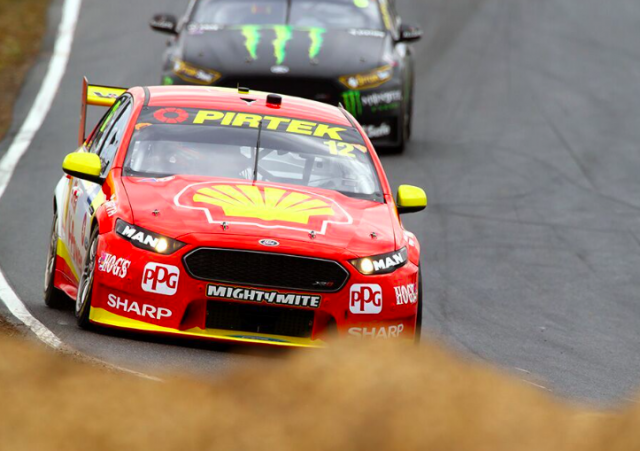 Fabian Coulthard has been penalised for his role in triggering a 12-car pile up in Saturday’s shortened race at The Tyrepower Tasmania Super Sprint.

The DJR Team Penske driver has been docked 35 championship points following a review of the incident by the stewards.

Coulthard made side-on contact with Rick Kelly’s Nissan through Turn 3 which sparked a chain reaction of events, resulting in a 12-car pile up that red flagged the race.

The Kiwi will slip to third in the championship standings behind James Courtney following the penalty.

“The Stewards imposed a penalty of the loss of 35 Championship Points on Car #12, Fabian Coulthard, following an investigation and an admission of Reckless Driving by him (Failing to give racing room to Car #15, on the exit of Turn 3, causing Car #15 to impact the fence on the left-hand side),” read a statement from CAMS Stewards.

“Consequently, Car #14 (Tim Slade) who was immediately behind Cars #12 and #15 impacted the rear of both Cars.

“Car #14 was found not to have contributed to the incident. Car #12 was found to be predominately to blame for the Incident involving Cars #15 and #14).”

DJRTP boss Ryan Story believes the penalty was harsh given the circumstances.

“I’m not necessarily sure that the punishment fits the crime but that’s what the stewards have handed down and we cop it on the chin,” said Story.