Thierry Neuville has a commanding lead in Corsica

Thierry Neuville has jumped from third to first place as his rivals in the Tour de Corse hit trouble on the twisty tarmac roads of the Mediterranean island.

The Hyundai driver turned a 25.8sec deficit into a commanding 38.9sec lead after Day 1 leader Kris Meeke retired with a major engine issue and Sebastien Ogier encountered a hydraulic fault.

Neuville, who retired from the lead at both Rallye Monte Carlo and Rally Sweden, is hoping to become the fourth different winner from the opening four events after Ogier (Ford) won the Monte Carlo, Jari-Matti Latvala (Toyota) took victory in Sweden and Meeke (Citroen) took honours in Mexico.

Meeke’s 16sec lead in Corsica was wiped out as his coasted to the finish with smoke billowing from its engine on the second stage. His car was retired soon after.

The morning stages were great for Neuville, who with Ogier struggling to find a good feeling in his Ford Fiesta, took a 10sec lead. The Hyundai driver took three of the day’s four stages.

“A fantastic day for us, and a real turnaround from Friday’s stages,” said Neuville.

“To score two stage wins on the first loop was very pleasing and we finished strongly with another fastest time this afternoon. Aside from a small spin in SS7, we’ve had nearly the perfect day.

“We won’t take anything for granted even with a 39-second advantage over Ogier. We have one very long stage to start Sunday, so this rally is far from over!”

Ogier won the day’s third stage and appeared to be back in the fight before the hydraulic issue meant he had to use the manual gear shifter and finished the stage in rear-wheel-drive only.

“At the end of SS7 we lost hydraulic pressure so I knew the problem was starting,” said Ogier.

“The target was to finish the day and get back to service. We had no gearshift and no differentials so it was like a proper rear-wheel drive car!” 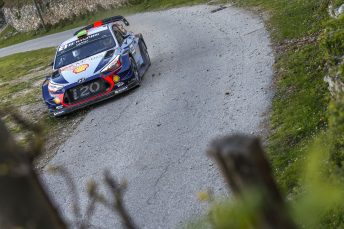 Dani Sordo sits third in his Hyundai after a solid but not spectacular day. He was 11.7sec ahead of Jari-Matti Latvala. Fifth is Craig Breen who encountered intercom issues, with one stage completed with effectively no pace notes.

Kiwi Hayden Paddon is sixth after a day where he worked on completing valuable tarmac miles.

“We have made steady progress today, trying to close on the top-five,” said Paddon.

“To be honest, we’re in a bit of a no man’s land on the classification, a bit too far away to pose any threat to Breen.

“I have enjoyed driving these stages today and we are closer to the front than we were here six months ago, so it’s not all bad. Our focus is now on bringing the car home. Anything could happen yet.”

Elfyn Evans retired after crashing his Ford Fiesta down a bank and Stephane Lefebvre also went out after hitting a bridge in his Citroen C3.

Sunday’s final leg comprises just two stages, but it opens with the longest test of the weekend, a marathon 53.78km, before the Power Stage finale, with bonus points for the fastest five drivers.