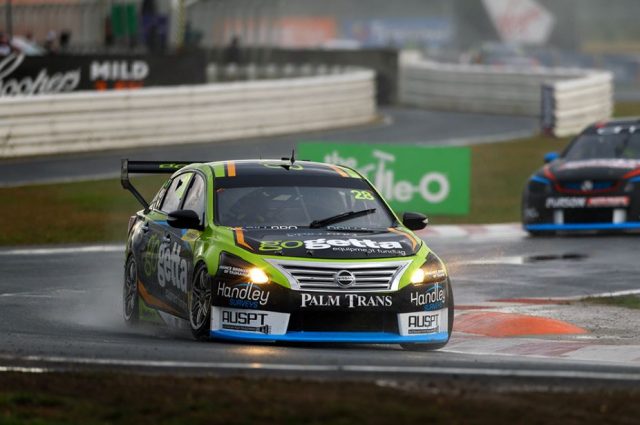 Jack Le Brocq has given the Nissan Altima its first ever Dunlop Super2 Series race win in another wet affair in Tasmania.

Le Brocq passed Race 3 winner Todd Hazelwood in the latter half of the race, while Dumbrell also made the move which gave him second in the race and a second round win for the year.

Race 4 started under Safety Car with very light rain still falling and plenty of standing water around the circuit after earlier heavy falls.

Hazelwood thus took control of the 20-car field when the green flags flew for the first time on Lap 5, by which time the rain had stopped but conditions remained poor.

He and Le Brocq pulled away from the pack, while Dumbrell went high to pass third-placed Shae Davies at the hairpin on Lap 7.

The battle for sixth between Garry Jacobson, Kurt Kostecki, and Will Brown came to a head when Jacobson ran wide at Turn 6 on Lap 8 and was spun by Kostecki as he attempted to gather up the Prodrive Falcon.

Brown took to the grass to avoid contact, but slid into the gravel and became trapped, bringing out the Safety Car.

Kurt Kostecki was given a drive-through penalty for the incident.

Hazelwood came under pressure from both Le Brocq and Dumbrell when the race restarted, reaching a crescendo before the GoGetta Altima got past at the end of the back straight on Lap 18.

Dumbrell followed a lap later, but finished the race in a very defensive state to Hazelwood, helped by the time-certain finish cutting the race from 30 to 24 laps.

Jack Perkins took the #4 Dragon Motor Racing Commodore to fourth, while Jacobson made an impressive recovery to salvage fifth.

His cause was helped when PRA team-mate Josh Kean unloaded Davies through Turn 7 on Lap 19, incurring a drive-through penalty.

“It’s been great to have Matt White Motorsport back behind us and running the car and the Nissan Motorsport guys have been awesome.”

Brad Jones Racing’s Macauley Jones and Jack Smith, and Bryce Fullwood, did not take the start after they suffered damage in the Race 2 pile-up the day prior.

Macauley Jones had suggested that his Commodore will be a write-off after it bore the brunt of the heavy contact.