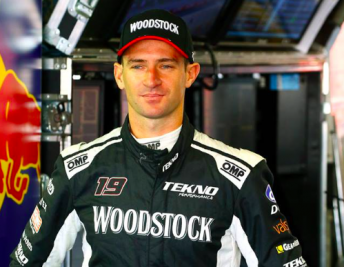 Will Davison has been released from hospital and is expected to fly back to his Gold Coast home on Monday.

The Tekno Autosports driver was transferred to Launceston General Hospital on Saturday evening suffering from lower back pain after being involved in a horrific 12-car pile up in Race 3.

Supercars medical delegate Dr Carl Le has confirmed to Speedcafe.com that the 34-year-old has been discharged from hospital and is mobile, although still sore from the impact.

Le also revealed tests have shown a possible fracture to a right sided transverse process, which is a small bony projection attached to vertebrae.

He is hopeful Davison will recover in time to compete at the WD-40 Phillip Island 500 from April 21-23.

“Will’s scans show a possible fracture of a right sided transverse process which comes off a vertebra,” Le told Speedcafe.com.

“This should heal up by itself reasonably quickly. He’s absorbed a large impact so is sore in quite a few places.

“Nothing that won’t heal with time. It’s only been 24 hours so we’ll see how he continues to recover over the next few days.

“Mentally he will be ready for Phillip Island, hopefully his body will be too.”

Davison’s damaged Tekno Commodore left Symmons Plains today as the squad bids to return the car to its Queensland workshop on Tuesday to begin the rebuild process.

Next Story Coulthard: McLaughlin has raised my game