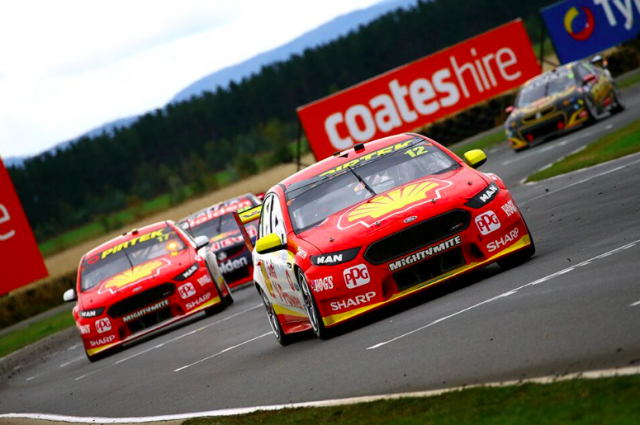 Fabian Coulthard has spearheaded DJR Team Penske to an impressive 1-2 finish in Race 4 of the Virgin Australia Supercars Championship at the Tyrepower Tasmania Super Sprint.

Coulthard produced a faultless drive from sixth, benefiting from a well executed pit strategy in a Safety Car impacted encounter on a damp Symmons Plains circuit.

The Kiwi led his countryman and team-mate Scott McLaughlin home for the DJRTP squad’s first Supercars championship race victory in its current guise.

Red Bull HRT driver Jamie Whincup came through to claim the final spot on the podium ahead of Triple Eight team-mate Craig Lowndes.

“I didn’t think it was possible after quali but Scotty had a really quick car in the wet and we couldn’t quite match him but in the dry the thing was a jet,” said Coulthard.

“Shell V-Power Racing, they’ve done a fantastic job, great teamwork in the pits, and I can’t offer much more. It’s been a great day.”

Coulthard managed to rise to second after the second round of pit stops and inherited the lead once Prodrive’s Chaz Mostert made a mistake and ran wide at the final corner midway through the race.

A short fuel fill at his first stop gave Mostert track position for large periods of the race, but the error dropped him to seventh at the flag.

Once in the lead Coulthard came under pressure from McLaughlin but held firm despite two late Safety Cars to take the win.

Polesitter Whincup was left to settle for third having been unable to match the pace of the Shell Fords.

He led away from the start but found himself back in third following the first round of pit stops.

McLaughlin and Coulthard both managed find a away by the six-time champion as he settled for third.

Lowndes was involved in an eventful race, which included a feisty tussle with Cameron Waters, that was to be investigated after the race.

Waters had run as high as second in the early stages before dropping to sixth at the finish, behind Erebus Motorsport’s David Reynolds, who produced an impressive drive to fifth.

The top 10 was completed by Tim Slade (Brad Jones Racing), Shane van Gisbergen, who received a 15 second time penalty for turning Todd Kelly around at Turn 4, and Garth Tander (GRM).

Alex Rullo sustained heavy damage to the rear of his Lucas Dumbrell Motorsport Commodore which forced him into a late retirement.

He was joined on the retirement list by Tim Blanchard (Brad Jones Racing) and Jason Bright (Prodrive).

Bright caused the first Safety Car when his slick-shod Falcon fired off the road at Turn 6.

Blanchard spun into the pit wall on lap 43 bringing out the second Safety Car.

Offs for Lee Holdsworth and Todd Kelly brought out the final two Safety Cars in the closing stages.

The race finished eight laps short of its scheduled distance due to the stoppages.

Van Gisbergen leads the championship by 20 points from Coulthard heading into the WD-40 Phillip Island 500.