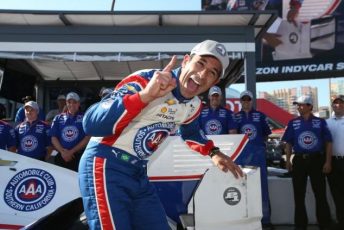 Helio Castroneves has broken the track record on his way to pole around the streets of Long Beach for the third straight year.

Castroneves clocked a 1:06.55s lap in the #3 Team Penske Chevrolet, and will share the front row with Scott Dixon, while Will Power qualified ninth.

There was drama early on when Simon Pagenaud failed to advance from the first segment of qualifying after he was judged to have blocked his team-mate Castroneves into the hairpin.

The Frenchman lost his two fastest laps as a result, and will start rear of grid in 21st.

Power cost himself with a poor exit from the hairpin during Segment 2, and the #12 Penske entry failed to advance any further in qualifying.

All but one of the 12 remaining drivers, headed by Dixon, broke Castroneves’ two-year-old track record in Segment 2, before the Brazilian went faster again in Segment 3.

Alexander Rossi (Andretti Autosport Hinda) starts on the inside of the third row, while Graham Rahal (Rahal Letterman Honda) was the other man to make Segment 3.

The 85-lap Grand Prix of Long Beach gets underway on Monday at 0630 AEST.