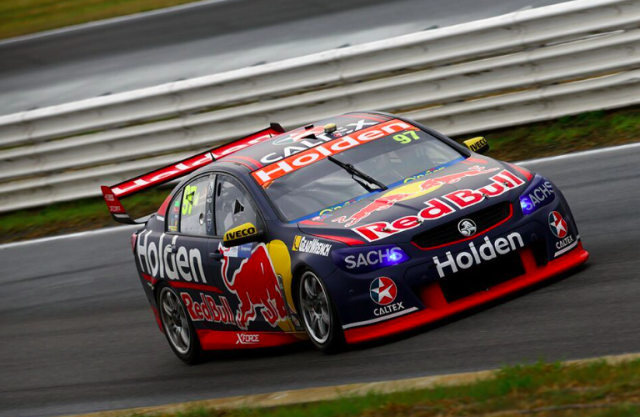 Shane van Gisbergen was declared the winner of shortened Race 3 at the Tyrepower Tasmania Super Sprint.

The Triple Eight driver led home team-mates Jamie Whincup and Craig Lowndes across the line when the race conducted one final lap under Safety Car following a huge multiple crash that saw officials suspend the race for 50 minutes.

Tander’s Commodore, which was broadside on the run to Turn 4, resulted in a crash involving 12 cars.

Davison was taken to a Launceston hospital complaining of back pain.

“First and foremost it’s good to hear everyone is okay,” said van Gisbergen.

“That’s a hard one. On that first lap I followed Chaz to the hairpin. The sun was out, there was a lot of spray, and I could hardly see – and that was only one car. I can see it wouldn’t have bene easy to avoid.

“I don’t really care about (winning the shortened race). I just hope we can have a good field tomorrow, everyone can fix their cars, and everyone is okay. I’m not sure what will happen points-wise, it’s not high on the prioirty list.”

Next Story No points issued for shortened Race 3 at Tasmania