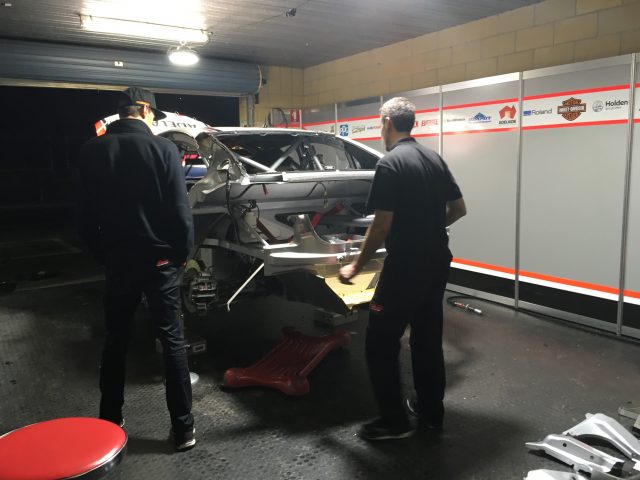 A host of teams will be working long into the night to repair cars in time for Sunday’s final heat of the Tyrepower Tasmania Super Sprint.

Brad Jones Racing, Garry Rogers Motorsport, Mobil 1 HSV Racing and Lucas Dumbrell Motorsport face late nights after their entries were caught up in a 12-car multiple pile up in Race 3.

It proved to be a disastrous day for Brad Jones Racing with its Tim Slade, Nick Percat and Tim Blanchard driven Commodores suffering varying degrees of damage in the accident.

“Assessment so far, look in the grand scheme of things considering how many cars piled into that I think we have come out of that with a lot of superficial damage,” Clark told Speedcafe.com.

“I mean it is going to be a bit of a late night but we have everything we need to repair it.

“Honestly, I would say car 8 is probably the least damaged, #14 is sort of second and third would be #21.

“There is no real chassis damage, I mean, nothing that is sort of going to hold us up anyway.

“Car 8 has one corner on the front and left hand rear corner (which needs to be repaired) and after that it is just superficial damage in the panels and so forth.

“Car 14 is basically front geometry, broken wishbone, right rear and parcel shelf and then superficial. We will beat the panels on all three cars.”

Garry Rogers Motorsport expects to have both its Commodores for Garth Tander and James Moffat repaired having escaped serious damage.

“The cars aren’t as bad as what we were initially expecting, which is a nice surprise,” team manager Stefan Millard told Speedcafe.com.

“Car #34’s pretty much just all bolt-on damage, which the guys are replacing now, that shouldn’t be an issue to get back on the track for tomorrow.

“But it’s nothing that’s unrepairable so the boys are getting into it and we should get out both cars in the morning.”

“The right front corner punched back into the cage, the cage is fixable and we will fix it here. There is a whole heap of stuff but everything is changeable and fixable.”

Meanwhile, Lucas Dumbrell Motorsport remains hopeful damage to the front right on Alex Rullo’s car is fixable at the circuit.

“Alex’s one is ironically pretty similar (to the damage on Taz Douglas’ car), the front-right’s copped the brunt of the damage, a little bit less impact it seems, but I think we’re going to be able to repair that one maybe for tomorrow,” team boss Lucas Dumbrell told Speedcafe.com.

“We’re still kind of surveying it now, but apart from the little bit of cosmetic damage to the back of Alex’s, the damage is predominantly to the front-right.

The teams will be racing to make qualifying for Race 4 at Symmons Plains which is scheduled for 1130 local time.

Next Story Davison set for overnight hospital stay after crash