Scott McLaughlin transferred his practice pace into an Armor All pole position for this afternoon’s opening heat at the Tyrepower Tasmania Super Sprint.

The DJR Team Penske driver recorded his first pole since joining the Queensland outfit with a comfortable margin in a rain-affected session at Symmons Plains.

It proved to be a frantic hit out with McLaughlin firing in his session best on a drying track in the closing stages.

The Kiwi’s 57.41s effort proved 0.3s quicker than nearest rival Chaz Mostert, who jumped onto the front row in the dying seconds.

“I’m pretty stoked. The car was fantastic and Ludo was keeping me up with the gaps the whole time and what pace I needed to hit,” said McLaughlin, who also topped final practice.

“The car’s fantastic and I can’t thank everyone at Shell V-Power enough and hopefully we can go good in the race.”

Shane van Gisbergen will head up the second row having been demoted to third in the Red Bull HRT Commodore.

The reigning champion will share the row with Erebus Motorsport’s David Reynolds. 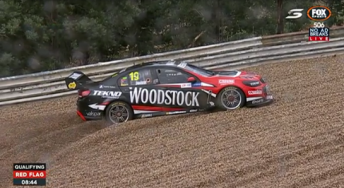 Will Davison in the Turn 4 gravel trap

It proved to be a strong session for the team as team-mate Dale Wood climbed to seventh behind the Triple Eight duo of Jamie Whincup and Craig Lowndes.

The top 10 was completed by Jason Bright (Prodrive), Todd Kelly (Nissan Motorsport) and Mark Winterbottom (Prodrive), while the second DJRTP entry of Fabian Coulthard ended up in 11th spot.

Will Davison will start from the back of the grid after causing the only red flag of the session at the halfway mark.

The Tekno Autosports driver locked a wheel and slipped into the gravel trap at the Turn 4 hairpin.

He took no further part in the session and had his best time wiped from the records.

“We struggled to get any grip in the tyres,” said Davison.

“It was good in the wet before but I was really fighting it. I grabbed a front wheel once I hit the brakes and I was a passenger.”

The opening 50 lap race of the Tyrepower Tasmania Super Sprint will start at 1645 local time.