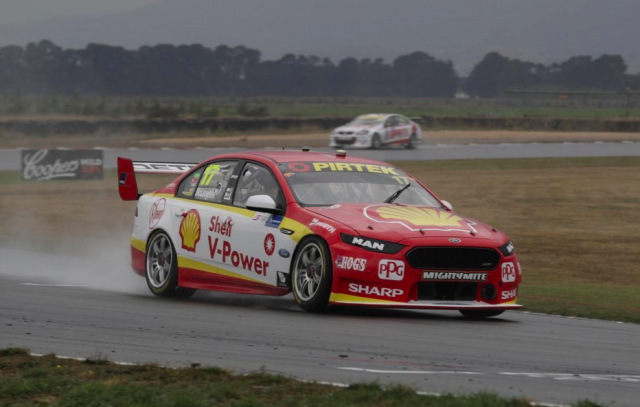 Scott McLaughlin emerged fastest from an action-filled final practice which was delayed by heavy downpour at Symmons Plains.

Torrential rain at the 2.4km circuit forced officials to delay the start by 10 minutes while rivers of waters cleared from the track.

McLaughlin was among those to show strong pace in tricky wet conditions before he came into his own with a last gasp effort on a drying track. Rivers running across the track at Turn 4

Equipped with slicks as a dry line appeared, the DJR Team Penske driver posted a 51.63s effort to top the time sheets.

The Kiwi had topped the times with a 56.0s time before the majority of the field switched to slicks.

Shane van Gisbergen once again showed his class in the slippery conditions before he translated his pace on slicks in the final 10 minutes of the session.

The Red Bull HRT pilot was pipped by McLaughlin at the death by 0.17s.

Tekno Autosports Will Davison was third ahead of the Shell Ford of Fabian Coulthard, who enjoyed spells at the top of the timesheets in the challenging conditions.

Among those to improve as the track dried was Cameron Waters by slotting his Monster Enegery Ford into fifth.

Nissan Motorsport showed encouraging wet pace across all four of its cars, but slipped down the order as the track dried.

Michael Caruso was the top Nissan in 13th position following an eventful session that saw him bring out the red flag after five minutes.

Caruso ran deep into the gravel trap at Turn 4 during the wet conditions earlier in the session.

Craig Lowndes ended the session at the bottom of the timesheets after making a late switch to slicks.

The Triple Eight driver had topped the session on a sopping wet circuit.

“The car is working really well but I didn’t get on to the slick tyre soon enough,” said Lowndes.

“We made a last-minute change which was a positive one but we couldn’t do a lap.

“Although the timesheets show one thing we’re really happy with the car in both the wet and dry.”