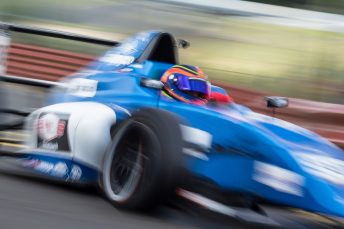 New Zealand’s Liam Lawson has taken the win in the opening round of the CAMS Jayco Australian Formula 4 Championship ahead of Josh Denton and Nick Rowe – who just last week was in hospital recovering from pneumonia. Round two will be held tomorrow in a first-ever double-header weekend for the category, running as part of round one of the 2017 Shannons Nationals at Sandown Raceway.

On his way to the round win, the Team BRM racer took home two second places (behind Rowe and Denton respectively) and a first place ahead of Cameron Shields. Zagame Autosport and CAMS Foundation Rising Star Ryan Suhle was third in all three races, joining Lawson and Rowe in some exciting three-way passing maneuverers through turn one across the day.

“It was a very intense race. I just focussed on the start; getting a good jump and then focussing of the first couple of laps and trying to get that gap,” Lawson said.

“I managed it, although towards the end there Cameron was closing on me fast. Really stoked with the result.”

“I think that was the longest 20 laps of my life! I think the 20 laps races make it a lot more physical but i think tomorrow, if it rains, it’ll take the pressure off a little bit.”

Suhle was crowned the Burson Auto Parts Rookie of the Round based off his trio of podium results today. JRD’s Jordan Mazzaroli was the second-best placed rookie ahead of Aaron Love.

The safety car was called for in the first two races – in race one for last year’s Australian Formula 3 National Class winner Cameron Shields who was stranded on the final corner with a burnt-out side-pod after contact with team-mate Simon Fallon, in the second for Zak Best.

Another three races will be held for the category tomorrow (Sunday), with Ryan Suhle to start on pole for the opening race following yesterday’s qualifying. 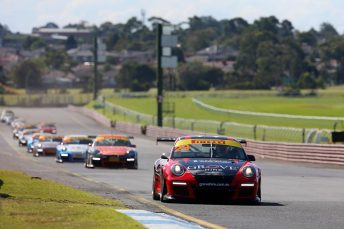 Grove scored pole position earlier in the day from Jordan Love and Anthony Gilbertson; the top three separated by just 0.03secs in qualifying. Grove then endured a slow start to race one, dropping down the order. As rivals filed past Grove, several made contact as they were filling the vacant track in front of the 19-year-old, resulting in a spectacular multi-car accident seconds after the start of the race. The contact forced John Karytinos, Jordan Love, Anthony Gilbertson, Rob Woods and Ben Stack out of the race.

Grove was then given a handy advantage on the restart, starting on pole position with his next competitor located fifth on the grid. While challenged for position early in the race, Grove was able to gap the field and ultimately take an 11.5 second victory. In the fight for second, Sam Shahin held the position and the Elite Class lead for the first half of the race before John Morriss moved ahead mid-race. Nick Karnaros and Michael O’Donnell then joined the battle in the closing laps, with just 0.7secs covering the quartet as they crossed the finish line; Karnaros claiming second place and the Elite Class win on debut from Shahin, Morriss and O’Donnell. 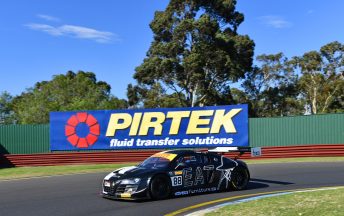 The Audi pairing of Rio Nugara and Jake Fouracre

The Audi pairing of Rio Nugara and Jake Fouracre will start from pole position for tomorrow’s first 50-minute CAMS Australian GT Trophy Series race after a strong showing in qualifying.

Fouracre set the pace early in the Eat Furniture Audi R8 LMS Ultra, his 1:10.952 beating last year’s pole position marker by a tenth of a second. Second on the grid went to Richard Gartner, who only pulled back the covers on the all-new Safe-T-Stop Lamborghini Gallardo earlier in the week.

Also on the pace at the front was Steve McLaughlan in the Valvoline Audi R8 Ultra, who was one of three drivers to dip below the 72-second barrier around the Sandown Park circuit. The Swirk Online Education Audi R8 Ultra of Rod Salmon then heads an incredibly close-knit group, with four cars split by little more than a tenth of a second.

The battle for pole position in the MARC class was equally ferocious, with Liam McClellan and Melinda Price holding out ahead of Keith Kassulke with John Goodacre (Gap Solutions/SEKTOR) in third by the narrowest of margins. Less than a tenth of a second split the three cars, McLellean’s 1:12.925 just 0.02s faster than Kassulke’s best effort from the first session.

Two 50-minute races tomorrow will complete the opening round of the 2017 CAMS Australian GT Trophy Series presented by Pirelli. 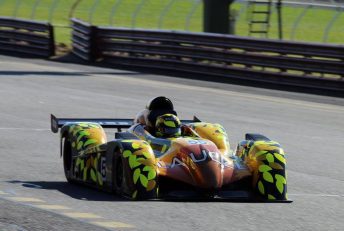 Mark Laucke took victory in the first race for the new series, crossing the line ahead of Mark Short. Peter Paddon was confirmed as third post-race, when Kim Burke was excluded for failing to present to parc ferme.

Laucke established a strong gap early over Short and Kim Burke – who had issues on his start by missing his pit box by a car length and then bogging down at the crucial moment – however with a slipping clutch would be forced to defend before being able to put a lapped car between himself and Short. Rounding out the top five were Radical racers Peter Paddon and David Crampton, with F1000 racer Terry Peovitis crossing the line in sixth place.

The respective debuts of the Synep Racing Wolf GB08 Tornado CN Prototypes of Josh and Adam Cranston were plagued by ‘new car’ gremlins after their delayed arrival into the country, however they would persevere to finish sixth and 12th respectively.

Sunday will host a further two races for the Australian Prototype Series at Sandown Raceway at 9.50am and 1.40pm.

Reigning champion Peter Paddon (First Focus Radical SR3RS) took the race one victory at Sandown today in what is round two of the 2017 Radical Australia Cup season. He crossed the line ahead of Oliver Smith and David Crampton, with Rowan Ross and Tony Haggarty rounding out the top five.

The race had started under a sunny sky but with dark clouds ominously looming on the horizon. Before the 50 minute race would be done, the skies would open and the race was declared early with just under eight minutes remaining on the clock.

The James Winslow/Michael Whiting entry had qualified on pole earlier in the day and lead for the first 30 minutes of the race, with Winslow pitting to hand over to Whiting before just laps later, Whiting returned to the pits and the entry was retired. Also failing to finish the race was Simon Haggarty and Kim Burke – with Burke retiring before completing a lap.

The category will have one more race for the weekend, taking place at 11.50am on Sunday.