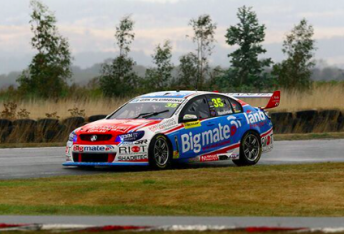 Todd Hazelwood has maintained his composure to win Race 3 in Round 2 of the Dunlop Super2 Series at a wet Symmons Plains Raceway.

After an emotional breakthrough win on home soil in Adelaide’s season opener, Hazelwood was kept honest by Jack Le Brocq throughout the race, while Shae Davies finished third.

Hazelwood and Paul Dumbrell, who won the first two races in Tasmania, made an even start from the front row, the Bigmate Commodore driver holding his place around the outside of Turn 2 before pulling clear exiting Turn 3.

Dumbrell opted for the high line around the hairpin on Lap 1, but the decision didn’t pay off as Le Brocq got through.

The top two then pulled away as Dumbrell struggled with tyre pressures, his Eggleston Motorsport team having overestimated the rate at which the track would dry after earlier rain.

The Safety Car was called on Lap 5 when Anton de Pasquale outbraked himself at the hairpin and couldn’t drive away, but Hazelwood and Le Brocq quickly pulled clear again when the race restarted.

The order at the front remained thereafter as the South Australian native doubled his race wins tally.

“It was good to get in front of PD at the front there and I thought I was pretty game hanging on around the outside because there wasn’t a lot of grip but we made it work and the car was fantastic,” said Hazelwood, who took over the round points lead.

At least three incidents will come under post-race investigation in what was a dramatic race further back.

Matt Chahda spun into the infield entering John Bowe Straight after contact with Nathan Morcom early in the race, while Adam Marjoram ended in the grass on the outside of Turn 6 after a touch with Jake Kostecki.

Kurt Kostecki turned Josh Kean around exiting the hairpin midway through proceedings, the pair having battled around the back of the top 10 for some time.

Jack Perkins finished fifth ahead of Richard Muscat, while Garry Jacobson climbed from 17th on the grid to seventh after his Race 2 penalty.

Will Brown, Kurt Kostecki, and Andrew Jones rounded out the top 10 despite the latter spinning himself out early on while trying to avoid punting Kurt Kostecki.

Andrew Jones was the lone starter for Brad Jones Racing after Macauley Jones and Jack Smith were involved in a Race 2 pile-up.

Macauley Jones confirmed that he was physically well, but his Payce Commodore may not see a race track again.

“(I’m) A little bit battered and bruise but structurally I’m still okay so we’ll be right for Phillip Island coming in a couple of weeks. We’ve just got a bit of work to do before that.”

Car #14 is set to be a write-off, however, Macauley Jones commenting, “I think it’s going to be the end of its life.”

The final race of the weekend will be held tomorrow at 1245 AEST.