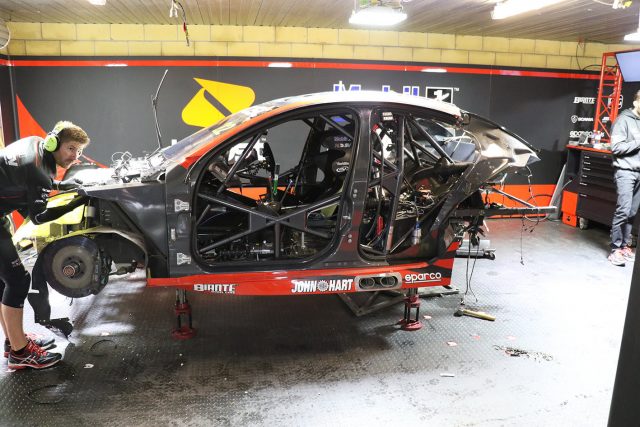 A depleted grid is expected for Sunday’s final heat of the Tyrepower Tasmania Super Sprint with four cars ruled out of the running following a huge crash in Race 3.

A multiple car pile up on the second lap saw 12 cars involved in a wreck which forced officials to suspend the race for 50 minutes.

Following an assessment of the damage, entries for James Courtney (Mobil 1 HSV Racing), Will Davison (Tekno Autosports), Rick Kelly (Nissan Motorsport) and Taz Douglas (LDM) are unable to be repaired on site and in time for Sunday’s action.

He will resort to a spare chassis for the following WD-40 Phillip Island 500 (April 21-23) while his car is repaired.

“Unfortunately car 22 has suffered significant damage to the drivers’ side intrusion bar work of the cage,” said Burgess.

“Clearly it’s not something we can take any shortcuts on, the fix needs to be done properly because it’s a safety thing, so we’ve had to pull car 22 from the remainder of the event.

“We have a spare car ready which James will jump into for Phillip Island, while this chassis will go back to the workshop to be properly inspected and repaired.”

Will Davison’s Tekno Autosports Commodore bore the brunt of the impact after hitting Rick Kelly’s Nissan before then suffering an impact to the rear of his car.

It is understood the car can be repaired but will be forced out of Sunday’s race.

Davison was taken to a hospital in Launceston after complaining of back pain where he will stay overnight as a precaution.

Meanwhile, Nissan Motorsport has confirmed Rick Kelly’s car will be absent from proceedings.

Kelly, who described the shunt as the biggest of his 16-year career, will be watching on from the sidelines on Sunday.

“I’ve raced every single race since starting in Supercars 16 years ago, so tomorrow will be the first time I watch it from the sidelines.

“It’s unfortunate, but now we want to get to the bottom of what set it all off. Because we don’t want to see what many cars taken out of a race.”

“We do have the spares to put it back together but unfortunately it’s ripped all the suspension points out of the front-right, and I reckon the front-right turret’s going to need to be cut off and replaced and put together,” Dumbrell told Speedcafe.com. 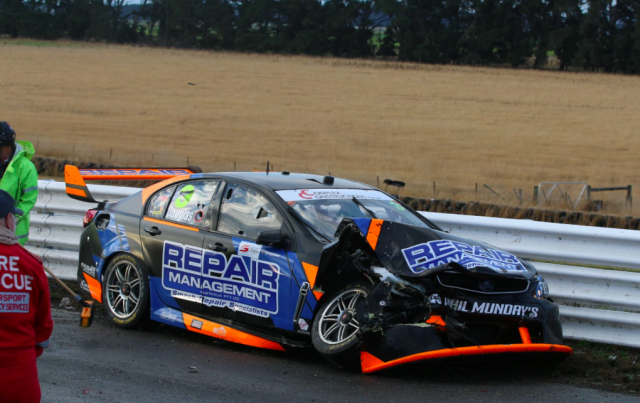 Previous Story No points issued for shortened Race 3 at Tasmania