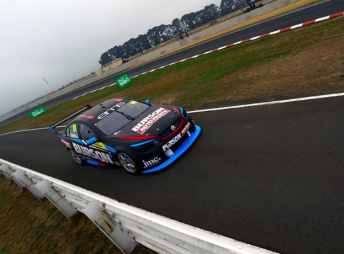 Paul Dumbrell has won Race 2 of the Dunlop Super2 Series at Symmons Plains, in a race which was suspended for an opening lap pile-up involving Macauley Jones.

Dumbrell made a clean getaway but drama unfolded behind him as the field accelerated for the run to the hairpin for the first time.

Sitting broadside, Jones’ Payce Commodore was t-boned on driver’s left by his BJR team-mate Jack Smith, while Bryce Fullwood careered into the left-front corner of car #14. 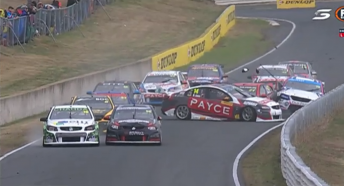 Fullwood was then cannoned into the stricken Commodore a second time when Mason Barbera similarly had nowhere to go and shunted car #16.

While all drivers appeared to escape serious injury, the race was soon red flagged due to the extent of the damage blocking most of the track.

Brad Jones confirmed that his son Macauley was largely unhurt.

“He sounded like he was winded on the radio and he’s limping a bit out of the car,” he reported. 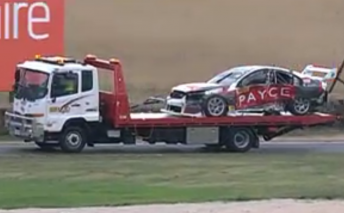 “(It’s a) tough way to start the weekend but at least he’s okay.”

With rain falling again after intermittent precipitation at the Launceston venue all day, all drivers changed to wet tyres during the race suspension.

The race eventually did restart with just two laps remaining after being shortened from 30 laps to six.

Dumbrell held his nerve to back up his Race 1 victory while Todd Hazelwood shadowed him home.

“It was pretty tough there,” said the race winner.

“A couple of laps sprint there – it certainly made for some interesting viewing.”

Jack Le Brocq claimed third after hanging tough on the outside of Turn 5, having got a run on Will Brown up the back straight when the race restarted.

Shae Davies also passed Will Brown by the time the chequered flag flew. 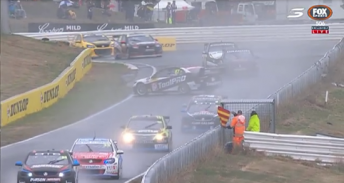 Jack Perkins finished sixth after avoiding a repeat of the Lap 1 drama, just missing Anton de Pasquale as the Paul Morris protégé spun his Falcon through Turn 3 on the final lap.

Garry Jacobson and Andrew Jones also had to react quickly to avoid contact with car #67, only for Jacobson to turn Jones around moments later at the hairpin.

Jacobson was subsequently issued a 15-second penalty, relegating him from ninth to 17th.

The Prodrive Racing Australia driver had also been stripped of pole earlier in the weekend for failing to obey red flag procedures.

The third of four races is coming up today at 1530 AEST.