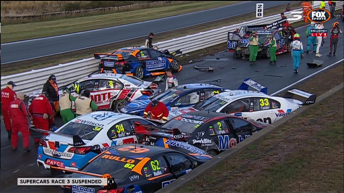 All drivers emerged from the wreckage although Will Davison has been transferred to a hospital in Launceston for precautionary checks after he suffered a huge impact with Rick Kelly’s Nissan.

Early reports suggest Davison is suffering from back pain after the crash.

The incident was triggered Cameron Waters and Garth Tander made contact on the run to the Turn 4 hairpin on the second lap of the race, which began in slippery wet conditions.

As a result of the contact Tander’s Garry Rogers Motorsport Commodore went sideways and tagged the rear of Rick Kelly’s Nissan Altima. 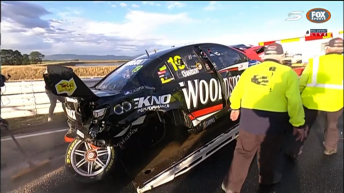 Will Davison’s car after the crash

With little room to take avoiding action several cars were caught up in the accident blocking the road. The race was red flagged and suspended.

The crash is expected to have caused more the $5 million worth of damage in what was one of the worst crashes in the championship’s history.

After a 50 minute delay the race did restart behind the Safety Car with a final lap completed.

Shane van Gisbergen led the field across the line in front of team-mate Jamie Whincup and Craig Lowndes.

Mostert had led the race before mistake at Turn 1 handed SVG the advantage.

Scott McLaughlin slipped to third and then pitted by mistake when the red flags flew.

Video of the incident

More angles of the incident

A new angle tells us more about that incident.

Full onboard with Will Davison