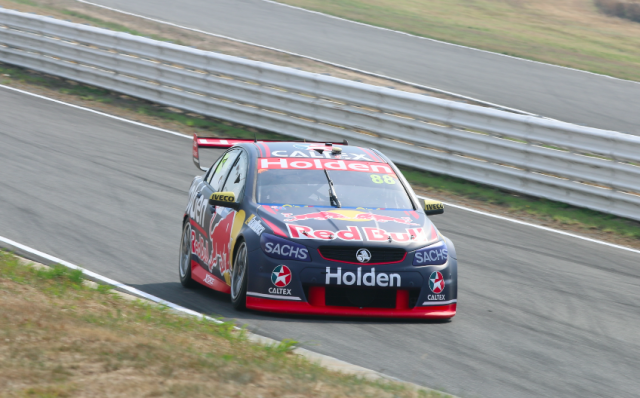 Jamie Whincup returned to the top of the time sheets in the opening practice session at the Tyrepower Tasmania Super Sprint. 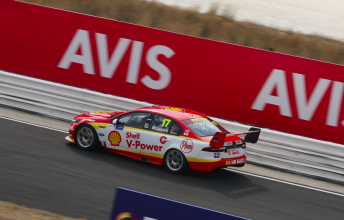 The Red Bull HRT driver saved his best for the final minutes of the session as the six-time champion made the most of a set of brand new super-soft tyres.

Whincup posted a time under his own 2014 qualifying and practice lap record with a 50.94s.

His effort surpassed the two DJR Team Penske Ford Falcons which had sat atop of the times heading into the final moments the 45 minute session.

The Kiwi was involved in an entertaining scrap with Fabian Coulthard, who had enjoyed a spell at the top of the times.

Coulthard ended the session in fifth behind Mobil 1 HSV Racing’s Scott Pye who was among those to improve late in the running. Slade was one of four drivers to endure off track excursions having run wide at Turn 1.

He was mirrored by team-mates Nick Percat and Tim Blanchard, who both had moments at the same corner.

Percat caused the only red flag of the session when he locked up and ran deep into the gravel trap at the Turn 4 hairpin with 17 minutes remaining.

The South Australian’s rebuilt Commodore, following the brake failure at Albert Park, was retrieved and he returned to the action later on.

“I’m battling with a bit of front locking,” said Percat.

Nick Percat was beached in the gavel trap

“The brakes are working exceptionally well this weekend compared to the last time I drove it.”

Erebus Motorsport’s Dale Wood was the other driver to run off the road when he ran wide at Turn 4.

Triple Eight’s Craig Lowndes could only managed a time good enough for P22 after suffering a power steering leak which saw him return to the garage for much of Practice.

“It’s a bit of a shame. The car is actually working very well, we’d made some good progress and just put on some new tyres to do a simulation of where we could have been.”

There was a late moment between James Courtney and James Moffat which resulted in the former gesticulating to the GRM driver.

Courtney locked a brake on his Mobil 1 HSV Racing Commodore and ran by Moffat at Turn 4.

“I was waving to Moff,” exclaimed Courtney following the incident.

“I locked up massively into the hairpin as I went past him and it wasn’t a bad sign – I was trying to be funny.

“For us, my own fault, I flatspotted a tyre massively at the GP on our super soft set so I had to run hards all this session, so just trying to hunt that balance.”

The field will return for another 45 minute practice session at 1500 local time.