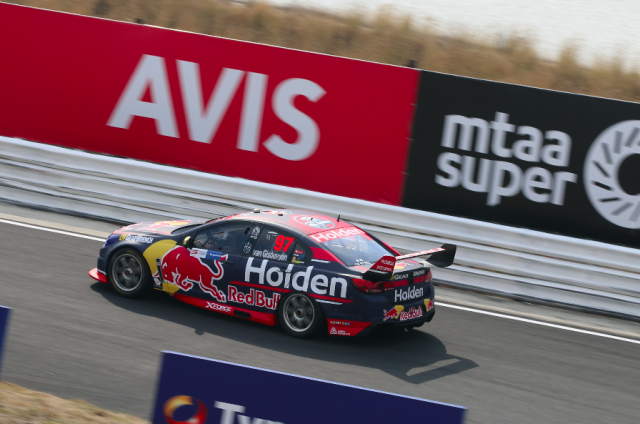 The reigning Supercars champion utilised a set of green super-soft tyres in the closing stages to post a new practice and qualifying record lap at the 2.4km circuit.

Van Gisbergen posted a 50.80s which proved to by just 0.08s faster then countryman Coulthard in the #12 Shell V Power Racing Falcon.

The pair had traded paint during a hotly contested opening 45 minute session.

“We put a good set (of tyres) on at the end there but we have another practice to sort it out,” said van Gisbergen.

“We were not fully happy but it was a great day and we progressed a lot.”

DJRTP’s strong pace from the opening session was backed up with McLaughlin third fastest.

The Kiwi moved to the top of the times towards the end of the session.

Opening practice pacesetter Jamie Whincup was fourth having led the majority of the hit out in the #88 Red Bull HRT Commodore.

Will Davison ended up fifth in the Tekno Autosports Commodore ahead of Brad Jones Racing’s Nick Percat.

Lowndes entered the session with a new steering rack fitted to his Commodore after suffering a power steering leak in the earlier session.

The session was punctuated by a red flag with 15 minutes remaining when James Courtney locked up his Mobil 1 HSV Racing Commodore and speared into the gravel trap at Turn 4.

The incident triggered stewards to launch an investigation into a potential breach of the red flag conditions by Lowndes.

The Supercars field will return for another 45 minute practice session on Saturday at 1130 ahead of qualifying and Race 3 of the championship.