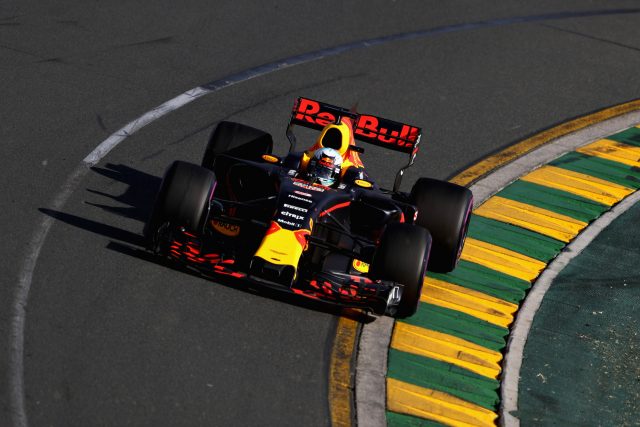 Red Bull Racing’s Daniel Ricciardo is expecting to receive the first in a series of Renault engine updates once the Formula 1 circus heads to Europe.

The Australian remains down on power with Red Bull adrift of its rivals Mercedes and Ferrari despite Renault delivering an improved unit ahead of the 2017 campaign.

The season opening Australian Grand Prix highlighted Red Bull’s plight although it is understood the squad’s lack of pace is not entirely attributed to the engine.

Renault has several upgrades in the pipeline according to Ricciardo with the first expected to arrive at the Spanish Grand Prix from May 12-14.

A more extensive update is planned for the Canadian Grand Prix in June.

Knowing Renault has a development strategy has given Ricciardo cause for optimism as the season progresses.

“You are always trying to improve it, we are still obviously searching for more performance,” Ricciardo told Speedcafe.com.

“I think we have started off okay where we are now but we are still not on Mercedes’ level so that is our target.

“We have been trying to get that since 2014 so we are still working on that.

“I think it is important (to have several upgrades on the horizon).

“It is something we tried to structure last year with them, we want as opposed to just a little bit here and there.

Following a disastrous homecoming at Albert Park, which resulted in a retirement, Ricciardo will be hoping to bounce back at this weekend’s Chinese Grand Prix.

The 27-year-old, who believes a podium is a reasonable target, has earmarked a lack of rear downforce as a particular issue with his RB13 which the team are working to resolve.

“I think for me at the moment, we don’t have enough rear grip – so downforce basically,” said Ricciardo.

“But to be honest, I don’t know if it is we don’t have enough or we haven’t set the car up in the right way.

“I still feel that we haven’t got the most out of the downforce. But I think in Melbourne, if I watch some onboards of Ferrari or Mercedes, it looks like they have more rear grip than us.

“I don’t think we have understood it well enough yet to get the most out of it with set-up and ride heights, that sort of thing.”

The opening practice session from Shanghai is due to begin at midday AEST.