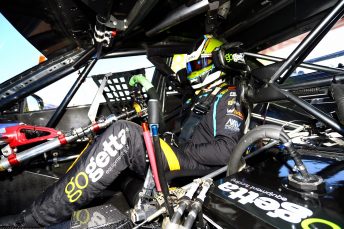 Jack Le Brocq has snatched the fastest lap after the chequered flag in practice for Round 2 of the Dunlop Super2 Series at Symmons Plains.

In foggy conditions which saw a brief delay to the start of the 40-minute session, Jacobson was quickest after the first timed laps in his Prodrive Racing Australia Falcon.

Dumbrell took over the next time around and gradually lowered the benchmark as he continued to lead in the #88 Eggleston Motorsport Commodore.

The session was then brought under red flags with just over a quarter of an hour remaining when Jack Perkins became stranded at the hairpin.

Ironically, it was Perkins who would shake up the order after the restart, going second and then to the very top in consecutive laps in his Dragon/Image Racing Commodore.

The final few minutes then saw a flurry of times at the 2.41km circuit, with Le Brocq first to dip under the 52.3s bracket.

Jacobson then went faster again, before Le Brocq settled matters with a 52.15s effort after the clock had struck zero.

Dumbrell, who had already appeared to have given up on the session, had meanwhile emerged from the pits for one final effort.

The twice Super2 champion went fastest to the first and second sectors but ultimately couldn’t improve on his personal best, set prior to the red flag, and instead stayed fourth.

Super2 now moves straight into qualifying at 1205 AEST, before the first of four 30-lap races this afternoon at 1415.