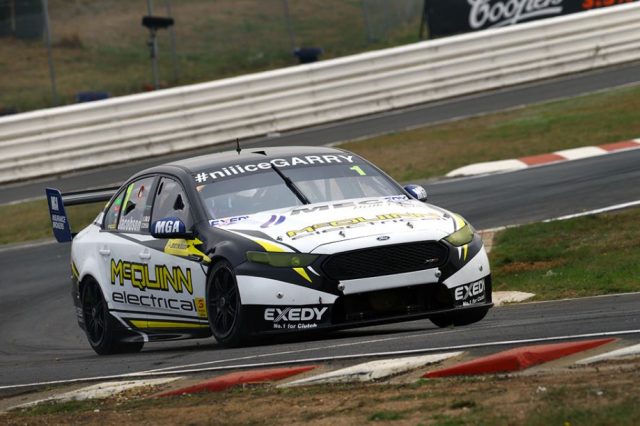 Garry Jacobson has taken his first Armor All Pole of the season in a hotly contest Dunlop Super2 Series qualifying session at Symmons Plains.

The Prodrive Racing Australia went to the top in the third part of the 20-minute session, after red flags caused by Macauley Jones and then his Brad Jones Racing team-mate Jack Smith.

Jacobson had set the early pace before Paul Dumbrell went quicker on his fourth lap.

Immediately at the conclusion of that lap, Dumbrell locked up over the rise at Turn 1 and threw his Eggleston Motorsport Commodore to the inside of the track and into the Turn 2 gravel trap, but managed to avoid marking a tyre.

Anton de Pasquale was next to top the timesheets in his Paul Morris Motorsport Falcon, before Macauley Jones ran off at the hairpin and brought a halt to the session.

Jacobson returned to P1 shortly after the restart before he nearly repeated Dumbrell’s moment as car #1 got sideways through Turn 1.

Practice pace-setter Jack Le Brocq looked on track to go quicker next time around but pinched a brake and missed the apex at Turn 6.

Will Brown, however, did go fastest just moments before a second red flag was triggered as Smith had also beached himself at the hairpin.

The Super2 rookie’s time at the top did not last, as Todd Hazelwood went first and Dumbrell into second.

In a tight ending, Jacobson edged Hazelwood by less than 0.1s with less than two minutes remaining, before Dumbrell split the pair to regain a place on the front row.

“Clipsal 500 wasn’t where I wanted to be and I just wanted to win at all costs, I was pushing as hard as I could in that session,” said Jacobson.

“It’s probably the hardest pole position I’ve ever had to get, so the category’s come a long way in the past 12 months.”

The first of four races will be run over 30 laps this afternoon at 1415 AEST.