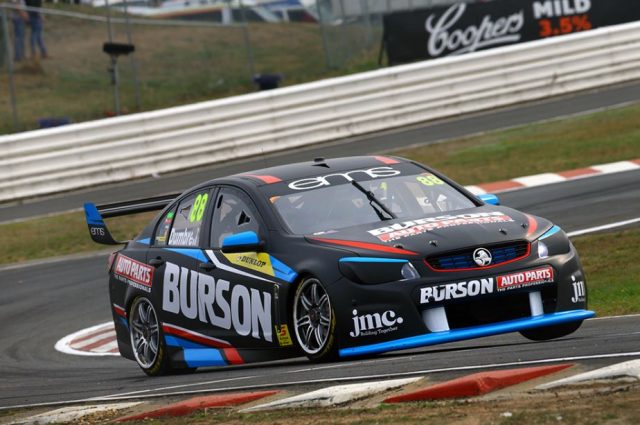 Paul Dumbrell has won the opening race in Round 2 of the Dunlop Super2 Series at Symmons Plains after original pole-sitter Garry Jacobson was excluded from qualifying.

Dumbrell, Todd Hazelwood, and Will Brown filled the top three as Jacobson salvaged 10th from a rear-of-grid start.

The Prodrive Racing Australia driver had set the fastest time in qualifying but was deemed to have started another lap during a red flag period.

Hazelwood won the start from the outside of the front row but ran deep into Turn 2 and was passed by new pole-sitter Dumbrell on exit.

Jacobson had made three positions on the opening lap but lost two of them when he and Renee Gracie made contact into Turn 2 on Lap 2, sending the #1 Falcon off the road.

Worse was to come for Gracie when she rode up on the side of Matt Chahda’s Commodore and finished up in the run-off at the hairpin on Lap 8, triggering the Safety Car.

Gracie claimed that Chahda, who had just run wide at Turn 2, was to blame for the incident, which is subject to a post-race investigation.

“Matt Chahda’s had a bit of an off, I’ve seen him re-join the track, and as we’ve gone up into Turn 4 I’ve seen that he’s blocking because he should have been over by then,” said Gracie.

“He was going slow so I thought I’d go around the outside because he can’t move across but obviously he did and I was there unfortunately.”

When the race restarted, Dumbrell gapped Hazelwood as the last-start winner came under pressure from Will Brown.

The #88 Eggleston Commodore continued to pull away before the race was neutralised again on Lap 23, this time for a stranded Richard Muscat.

Muscat had been battling with Anton de Pasquale and was kept wide of the race line at Turn 1, losing control and running through the infield before spinning.

The Garry Rogers Motorsport driver survived that incident before making a similar, this time unforced, error a lap later and finding the gravel trap.

Dumbrell faced what was ultimately a single-lap dash to the finish, but Hazelwood let him off the hook in running wide at the Hairpin.

Hazelwood managed to hold onto second in a race which was cut from 30 to 25 laps, with Brown on the podium in his rookie season.

Two more 30-lap races follow tomorrow, the first at 1305 AEDT, under the new four-race format which will be run at selected rounds this year.