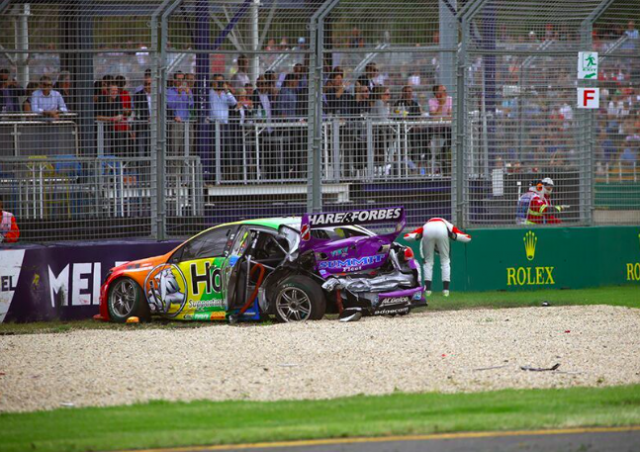 Supercars control brake supplier AP Racing is confident a fix introduced at Symmons Plains will eradicate the possibility of a reoccurrence of the freak failure suffered by Nick Percat at Albert Park.

The British manufacturer has conducted extensive work to produce a solution since Percat suffered a frightening failure in the opening heat at the non championship Australian Grand Prix meeting.

As a result, AP Racing has elected to issue an upgrade to all brake callipers ahead of this weekend’s Tyrepower Tasmania Super Sprint.

A secondary plug has been placed over the Avdel2 seal which AP Racing is confident will resolve the issue.

Percat’s failure has been dubbed a freak incident by AP Racing’s technical sales manager Ian Nash, who has been dispatched from England to Tasmania to oversee the fitting of the upgrade.

“We have responded pretty quickly and we have done a lot of work in that time since the failure,” Nash told Speedcafe.com.

“We’re confident we have put a fixture in place to stop it and we don’t believe there would be another occurrence of that not in the short term.

“We haven’t been able to replicate the failure at the same level of pressure.

“AP Racing has done lots of testing this week with that plug in place and we can’t fail it and we have taken those callipers to pressures over 600 bar.

“We wanted to give everyone and ourselves complete piece of mind.

“We have come out here to oversee the fitting of all those plugs and the condition of the plugs and we haven’t seen anything that worries us at all.

Percat, who emerged from the incident unscathed, says he is reassured by the swift response issued by AP Racing and Supercars.

“They have identified there is an issue and they have put to something in place to stop it happening. As a driver I feel better that it is there.

“The calliper that had the issue was one of our newest ones and we hadn’t had any issues before.

“Anytime that the manufacturer are out at the race track or in the workshop is reassuring. It is a credit to AP and Supercars.

“Any time you have no brakes is the worst situation.

“We were lucky that we were at the Grand Prix with such a big run off which made a massive difference. I was very fortunate.”

The view is echoed by Lee Holdsworth who was was clattered into by the out-of-control Percat at Albert Park.

“It was a pretty dangerous situation but they (AP Racing) have addressed it to what they think will fix the problem,” Holdsworth told Speedcafe.com.

“Hopefully we don’t see a problem like that. It plays on everyones minds and not just mine when you see something like that and it being no mistake from the teams.”

Both rebuilt Commodores of Percat and Holdsworth will take part in opening practice at 1240 today.