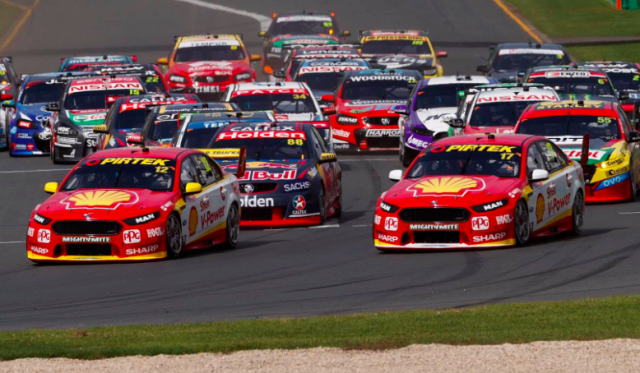 The two teams have come out of the blocks the fastest this season providing a growing rivalry heading into the second championship round of the campaign.

Triple Eight’s Shane van Gisbergen stamped his authority on the season opening Clipsal 500 by scoring back-to-back pole positions and victories to complete a perfect start to his title defence.

Meanwhile, DJR Team Penske signalled its intentions with strong pace and podiums in Adelaide, which was backed up at the non-championship Australian Grand Prix meeting.

The squad recorded three wins from the four sprint races, shared between drivers Scott McLaughlin and Fabian Coulthard, in what was the Australian/American alliance’s most successful weekend to date.

A visit to the tricky 2.4km Symmons Plains circuit should provide further indication as to DJRTP’s growing strength having previously struggled for results in the last two years.

While the Shell V Power Racing Team has moved to cool expectations, Triple Eight boss Mark Dutton fully expects the Ford team to be amongst the front runners.

“Definitely I see them (DJRTP) carrying this on for sure,” Dutton told Speedcafe.com.

“Ludo has got a lot of experience and we as Triple Eight have been very successful at Tassie before.

“He will definitely have the sort of knowledge regarding how the cars can perform in Tassie, and set-up tricks and tools that we have done before to do that.

“Combining that with what he has learned since being there and with the new tyre they should be very strong along with some other people. It will be tough.

“I’m not really surprised how quickly they (DJRTP) have turned it around.

“They have got huge backing and facilities and capabilities in the country and out of the country. I’m sure they are working hard for it.”

Dutton says DJRTP’s rise in form has not been a distraction for the Brisbane squad.

“Every year is the same. Someone comes out and they start really strong and they give you a bit of shake up,” added Dutton.

“Even last year we didn’t have the best start to the season compared to the end where we finished so strongly.

“We are always pretty flat out and that is the truth. It is not that you can work harder really.

“Sometimes when you see other teams going quicker than you it does re-adjust your focus slightly.

“If you see someone going faster than you it proves that those speeds are possible for a start. It is business as usual for us. It is heads down.”

Triple Eight is however confident gains have been made in understanding the new Dunlop super-soft tyres heading into Tasmania.

“Tassie practice is going to be hectic,” he said.

“It is a crucial practice session and we were fortunate to learn some things at the Grand Prix. We are going be testing things at Tassie to see if we have moved forward.”

The Supercars field will hit the Symmons Plains circuit on Friday at 1240 for the opening practice session.