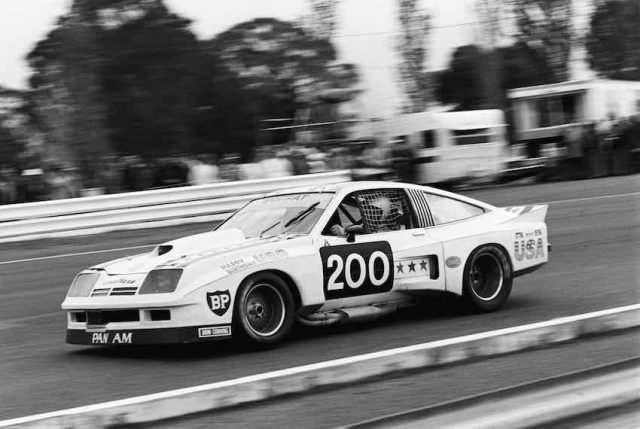 Allan Moffat in the American Monza

Today’s AN1 Images Shot of the week is from Round 2 of the 1976 Australian Sports Sedan Championship at Melbourne’s Sandown Raceway.

The race meeting was held on the 4th of July 1976 and the significance of this date was not lost on racing legend Allan Moffat.

Having spent the early part of his professional career in the United States, Moffat celebrated the American Bicentenary by running the number 200 and covering his American Monza in ‘Happy Birthday USA’ messages.

Yet the party was over as soon as the racing began. The intense four-way battle between Moffat, Colin Bond in the brand new HDT Torana sports sedan, Pete Geoghegan in the Craven Mild Monaro and Jim Richards in the Sidchrome Mustang saw all four cars split by mere tenths.

Moffat and Geoghegan fought for the lead in heat one, with Geoghegan spinning the Monaro off in turn-one allowing Moffat to take the win.

Big Pete bounced back in heat two to survive countless passing attempts by Moffat. Geoghegan took the chequered flag but Moffat took the round win in one of the most memorable days of Sports Sedan racing seen at Sandown.

This is just one of a range of great shots from Allan Moffat in the AN1 Images files on their website, featuring some of the best Australian motorsport photography produced.

To purchase this photo, or one just like it, visit www.an1images.com or click on the banner below.