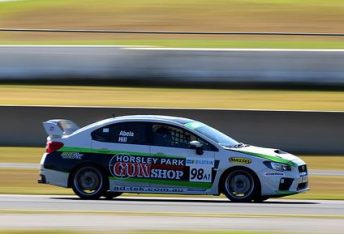 The WRX which Abela and Hill ran at SMP pic: Nathan Wong

Hill’s confirmation marks a reuniting of the youngsters after they drove the same Subaru together in the 2016 Australian Production Car Series finale at Sydney Motorsport Park.

The 2015 WRX has been entered by the Abelas to run in Class A1 (extreme performance forced induction).

“Cameron and I have been doing a lot of running in preparation for the Hi-Tec Oils Bathurst 6 Hour at not only our local Wakefield Park, but also at Sydney Motorsport Park and Winton Raceway.

“There is still a lot to learn with the car and a fair bit of development to come, but Cameron and I are very keen to get in and have a steer around one of the best tracks in Australia.”

For Hill, the 2015 Australian Formula Ford champion, the WRX represents a different challenge before he returns to the Toyota 86 Racing Series at Phillip Island a week later.

“Because it is a four-wheel-drive it has a lot of grip in the corners, but still moves around a fair bit when you push it to the edge.”

The Hi-Tec Oils Bathurst 6 Hour, which incorporates Round 1 of the Australian Production Car season, will be held at Mount Panorama from April 14-16.