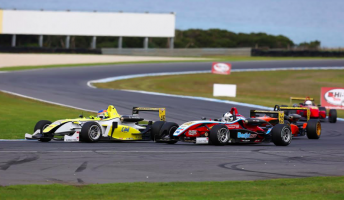 The re-born Australian Formula 3 Premier Series has released a revised calendar including the addition of Phillip Island.

The move to include a round at the Victorian circuit follows the cancellation of its planned opening round at Winton from April 13-16.

As a result, the series will now begin at Queensland’s Morgan Park from May 19-21 before visits to South Australia’s Mallala (June 9-11) and Sydney Motorsport Park (July 1-2).

Phillip Island will host the fourth round from August 19-20 with the series set to join the Victorian Road Racing Championships.

The category will compete for the John Roxborough Trophy which dates back to 1968.

“Re-scheduling of the calendar has come about as a result of the promoter at Winton cancelling a meeting that was to have hosted the first round of our Series,” said Australian F3 spokesman Mike Drewer.

“We are delighted that the Phillip Island Auto Racing Club (PIARC) has seen fit to reconstitute the Victorian Road Racing Championship title for Round 4 of the Australian Formula 3 Premier Series.

“This title is part of the DNA of Australian open-wheeler racing with other past winners including such names as Arthur Abrahams, Simon Hardwidge, Brian Sampson, Wayne Ford, and James Manderson.”